Aubrey Spencer J Woodward, the son of Thomas Harold and Elizabeth Mary Woodward, enlisted into the General Service Corps and volunteered for airborne forces in 1945.

He undertook parachute training course B184 from 9 November to 26 December 1945 at RAF Ringway. The course report states: ‘A reliable type, quiet and steady. Jumped well.’ Private Woodward went to the Holding Battalion and was later posted to the 2nd Parachute Battalion.

Private Woodward died aged 21 years in Palestine on 25 October 1947 when the lorry he was travelling in collided with another military vehicle. He is now buried in Khayat Beach War Cemetery, Israel.

NB L/Cpl Preston, who died in the same accident, was also on course B184. 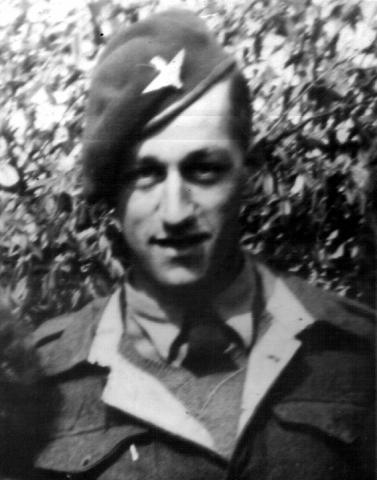 Natalie Fairlie said:
Looking and hoping to gain contact with anyone who knew my Uncle Aubrey Woodward killed in Palestine 25.10.1947. I know that a George Dwyer sent my mother Enid Woodward a Christmas card from Palestine and that a Private Clark was Aubrey's closest friend and a bearer at his funeral. I have uploaded pictures showing this. I would be grateful for any information regarding my uncle.
Natalie Fairlie said:
My maiden name was Brooks .
Add your comment