Arthur Walter Harvey was born in January 1919. He joined the Territorial Army in 1938 as a bandsman of 4th Queen's Regiment, based in Croydon.

When war broke out, he was attested to the Regular Army and moved to Richmond Barracks, Catterick to undertake basic training for the Royal Signals. Completing his training, he became part of the HQ Signals personnel for 2nd Division at Mons Barracks in Aldershot. When the Division deployed to join the British Expeditionary Force(BEF) in France he operated a mechanical digger to lay signal cables, and a 13cwt signals vehicle. He was part of the retreat to Dunkirk in the face of German advances across Northern Europe, and finally escaped returning to the UK at Margate.

Back in the UK the situation was rather chaotic. As Arthur stood on a parade ground at Halifax, one of the two 'Harvey's present was posted to India, whilst he was sent to Martlesham, near Ipswich! He spent some time attached to the Field Artillery unit on air defence duties, but by his own admission 'did not have a clue what he was supposed to be doing'. Despite his confusion, it was not without incident and whilst riding as a motorcycle despatch rider he was lucky to survive being straffed by an Italian aircraft.

In search of a new challenge and, perhaps, some continuity, he volunteered for Special Services and trained to the 'Phantom' GHQ Liaison Regiment. He was originally posted to Scotland, for Special Service training, and moved on to RAF Ringway to train as a parachutist. After completion of his training, he joined F Squadron.

Arthur's signals skills came in very useful for the his new unit, and he found himself attached to Airborne Forces HQ at Moor Park, near Watford. It was his responsibility to operate six-wheeler US signals vehicles.

By the end of the war in Europe, Arthur was in Essex. Soon afterwards he travelled to Norway to assist in the disarmament of German occupation forces and the return of civilian order. Despite his duties, an abiding memory of the operation was the glorious weather, which made for his 'best summer holiday'!

Arthur's final posting was to Germany, where he was stationed at the HQ British Army of the Rhine (BAOR) at Bad Oeynhausen. Although initially with F Squadron, the Phantoms disbanded in 1945, but Arthur was retained as part of the Headquarters staff at BAOR HQ.

Arthur was eventually demobbed as a Sergeant in 1947, after eight years regular service. A further four years followed on the reserve list, though he was not called up for service in the Korean War. 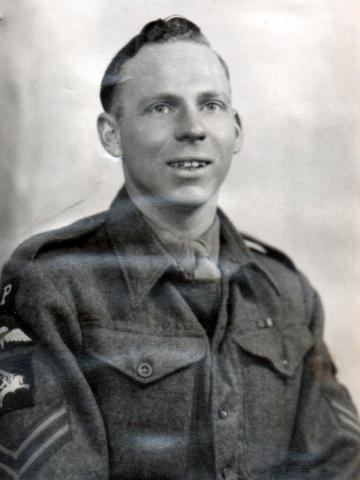