Arthur Thomas Williams joined The Royal Engineers in 1940 and saw service in Kent while billetted in Folkestone during the Battle of Britain to help maintain airfields. Later, in early 1942, he moved to Thetford Forest and helped to construct a large encampment for US forces.  However, deciding that he didn't just want to use a hammer and saw throughout the war, Tom volunteered for the newly formed Airborne Forces in 1942.

After completing Parachute Course No 26, at RAF Ringway, in September 1942, Tom joined 9th (Airborne) Field Company Royal Engineers and was trained in the use of explosives.  It was during this period that Tom volunteered to take part in "The Washington Cup" a competition purportedly between British and US Engineers involving either a parachute drop or glider landing, followed by a battle march across harsh terrain and then a series of tests and demolitions.  Tom began training for this but, prior to the move to Wales for further training, dropped out for a period of leave which had been previously booked.

It was only on his return from leave, that Tom was to learn that the competition was actually a cover for the training for Op Freshman - the airborne assault on the Norsk Hydro Plant, Vermork, in Norway.  Secrecy was so high that the officers involved could not cancel Tom's leave for fear of exposing the real reason for the competition so early on.  Those engineers who did undertake the full mission in November 1942 were all killed.

Tom then saw action in Tunisia and landed in Sicily, in a Horsa Glider, as part of the airborne assault, assisting in the capture of the Ponte Grande Bridge. His company was awarded a scroll by King George VI to commemorate its role in the battle.

Further service followed in Italy where Tom landed as part of a mixed force in Taranto, where he became one of the first ashore.

Following a return to the UK in Christmas 1943, he was held as a reserve for the Normandy landings in June 1944.

His next operation was Market Garden - the Battle of Arnhem in September 1944.  Landing on 17 September progress was initially uneventful but as the battle intensified casualties increased.  Tom took part in the transport of Polish Paratroopers across the Rhine, using dinghys, but was separated from his unit during an intense mortar barrage of the shoreline.  He found himself working alongside the Dutch resistance, before returning to his unit.  Food and water were scarce and Tom scavenged vegetables from gardens during respites in the fighting.

Tom successfully crossed the Rhine at the end of the battle and clearly remembers the tot of rum and biscuits he recived once safely on the Allied side of the river.

After returning to the UK, via Brussels, Tom injured his knee playing football and was not with 9th (Airborne) Field Company when it went into Norway on VE day 1945.

In later life Tom had several falls which caused him to go blind, but he was determined to say in his own home in Newmarket.

After a short illness Tom died peacefully surrounded by all his family on 23 November 2014 aged 94. 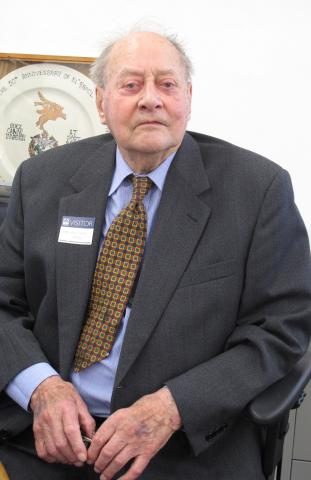