Arthur Sisson joined the Army in September 1943 and served in the ranks until he was granted an emergency commission with The Royal Artillery on 8 July 1945, when he joined 159th Parachute Light Regiment RA, then based in Billaspur.

He was promoted to Captain shortly before the regiment’s deployment to Palestine in 1947, which was later redesignated as 87th Airborne Field Regiment RA, and served most of his time there as its Adjutant.

Arthur left shortly before the regiment’s departure back to the UK in March 1948 for disbandment, to serve as assistant commandant at the Jewish immigrant holding camps at Xylotymbau in Cyprus.

His airborne connections were renewed when he was appointed as aide-de-camp to General Eric Down in 1952, who led the conversion of 11 SAS Battalion during World War II to become the 1st Parachute Battalion of The Parachute Regiment, and by then GOC Mid-West District and 53 (Welsh) Infantry Division.

After a series of postings within the RA and attendance at the Staff College, Arthur was promoted to Major at the beginning of 1958 and posted as Deputy Assistant Adjutant General (Co-ordination) at General Headquarters Far East Land Forces, where he remained until May 1959.

His efforts, particularly in the last post, were recognised in 1968 both by the award of the MBE (see citation) and his promotion to Lt Colonel. Shortly after, he became Assistant Quarter Master General Q (Equipment Management and Development) at HQ British Army of the Rhine (1968-1971).

While serving in BAOR he supervised the troop trials on Bulk Re-fuelling. This saw the replacement of jerricans by collapsible bulk storage facilities and rough-terrain tanker vehicles throughout the Combat Zone, providing a huge saving in manpower and an increase in speed and efficiency

The latter part of his career was devoted to the modernisation of operational logistics, particularly the restructuring of the Army so that it could deploy men and equipment on operations using aircraft rather than ships. To this end he found his early training and experience in Airborne Divisions invaluable and from 1971 to 1976 he held various staff posts connected with logistics planning at the rank of full Colonel.

In 1973, while serving as  Colonel Q in HQ United Kingdom Land Forces, he ran the largest live logistic exercise in the UK since the end of WW 2. This exercise tested the new bulk refuelling system and confirmed the inadequacy of plans for the outloading and distribution of ammunition in a major war. Another logistic achievement during this period was the total revision of Mobilisation Plans for General War, which until then had failed to move with the times since the end of WW 2.

Promoted to Brigadier in 1976 he became Director (Q) Organisation and Development of Logistic Equipment. He took over this post at a particularly sensitive and difficult time of restructuring, when he was closely involved with studies and plans which made the first steps towards the creation of a Logistic Corps. His efforts were again recognised with the award of the CBE (see citation) in 1978.

He initiated a significant advance in British Army logistics with the development of the Demountable Rack Operating System (DROPS), a hook-and-cable device mounted on a flat-bed tipper truck which enables the driver to load and unload palletised ammunition etc single-handed. The elimination of manual loading and unloading parties at depots and unit locations provided a solution for a previously insoluble problem in General War.

Brigadier Sisson's final logistic milestone, prior to retirement from the Army, was the issue in May 1979 of a document "Guidelines for Logistic Planning 1980-2005”. Such a document, coordinating the basic principles and constraints regarding logistic and administrative planning for war had been missing within MOD since the 1950s.

Citation for the award of the MBE to Major Arthur Sisson

Major Sisson has been engaged for the last fourteen months on world wide forward logistic planning.

Citation for the award of the CBE to Brigadier Arthur Sisson

Brigadier Sisson has been closely involved with the Quarter-Master-General’s plans for the restructuring of the Department and the Q Services since October 1974, first as Secretary of the Somervill 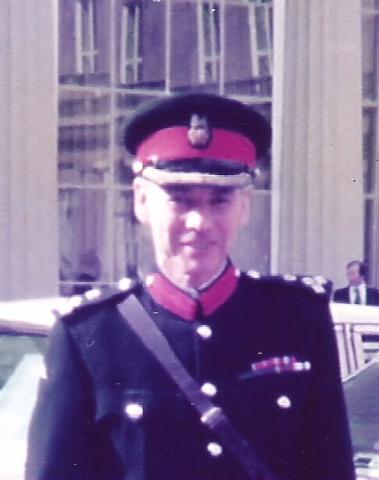