Arthur James Sennett was born in Southampton on 3 February 1923 and worked as a driver before enlisting into 3rd Depot Battalion, The Royal Signals on 22 January 1942 aged just 18. He trained as Operator Wireless and Linesman.

Signalman Sennett volunteered for airborne forces in August 1942 and qualified as a military parachutist on Course 43 which ran at RAF Ringway from 20 December 1942 until 2 January 1943. The course instructors remarks were "Very consistent worker, reached a very satisfactory standard".

He was then posted to A Section, 1 Company, 1st Airborne Divisional Signals. (1 A/B Div Sigs) in North Africa. It was around this time he was given the name ‘Mac’ after the Canadian producer and actor of slapstick comedy (Keystone Cops) Mack Sennett.

During Operation Husky in Sicily, Sgnmn Sennett was wounded in action on 10 July 1943, whilst on a recce mission, the open backed jeep he was travelling in was spotted by a tank and took a direct hit; he was the sole survivor and left for dead by the enemy. He was later treated by a passing unit and hospitalised in South Africa where he recovered from his injuries and returned to his unit on 9 October 1943.1 A/B Div Sigs were posted back to the UK to standby for invasion of Europe in December 1943.

On 18 September Sgnmn Sennett parachuted into Arnhem on the second wave of drops for Market Garden. He managed to return across the river (RAR) during the night-time evacuation of Operation Berlin, due to the limited number of places on the boats he made the decision to swim across the fast flowing Lower Rhine. Exhausted, but alive, he was pulled from the water by a Canadian and given dry clothing and food and slept soundly for 48 hours.

Sgnmn Sennett was extremely proud to be one of over 400 hand-picked soldiers from all areas of the Division who proudly paraded through the gates of Buckingham Palace for the Arnhem Investiture and to listen to Lt-General "Boy" Browning give a farewell speech to the 'men of Arnhem' before marching back through the streets of London to Wellington Barracks.

On 6 May 1945 he embarked for Norway on Operation Doomsday Serving with 1st Parachute Brigade Signal Section.

He was transferred 6th Airborne Division Signals as a wireless operator in July.

Sgt Sennett was demobbed in October 1946. His release record state "An outstanding leader with an enormous capacity for work, reliable in every way."

Compiled by Wendy George with assistance from Roger Sennett 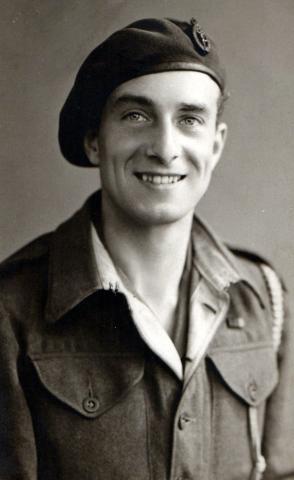