Sapper Arthur Hall was the husband of Daisy Hall, although little else is known about his upbringing and family life.

It is known that Sapper Hall was serving in 9 Field Company by the time it sailed from Gourock on 16 April 1943, on the River Clyde, in the liner Boissevain bound for North Africa. On 9/10 July 1943, the Company, as part of the 1st Air Landing Brigade, was engaged in Operation Ladbroke, the first of two hazardous glider landings in Sicily. Some men from the 9th assisted in the capture of the Ponte Grande bridge near Syracuse and others in the Company dealt with coastal defences which could be an impediment to the main invasion force. After being relieved by the advance spearhead of the invasion force, on 16 July, they were taken back to Tunisia in Infantry Landing Craft.

On 8 September 1943, the whole Company sailed from Bizerta in the American cruiser U.S.S. Boise for Operation Slapstick, as part of the invasion of mainland Italy, and during the voyage they learned that the Italian forces had capitulated. They landed at the port of Taranto and for the next month they carried out various tasks including repairs to the dock and mine clearance. The 9th later moved forward with the advancing forces and on occasions small parties operated behind enemy lines cutting railway lines thereby denying the Germans reinforcements and supplies. A detachment of eight Sappers under Corporal Roy Allen sailed in an Infantry Landing Craft to Salerno where they cleared about 700 mines from the beaches.

Spr ‘Jigger’ Price recalled that in 1943 Sapper Hall, known as “Henry” after the band leader, was his No. 2 on a Bren Gun. They were good friends and together in the UK before the tragedy at Double Hills

Just after 10.00 hours on Sunday 17 September 1944 sixteen glider and tug combinations took off from RAF Keevil for Arnhem as part of Operation Market Garden. Horsa Glider RJ113 (Chalk 389) was in this group of aircraft and contained 21 men, including Sapper Hall, from No 1 Platoon 9th (Airborne) Field Company Royal Engineers. The glider was flown by S/Sgt L J Gardner and co-pilot Sgt R A Fraser from D Squadron, 1st Wing The Glider Pilot Regiment. It was towed by a Short Stirling, No. LK 148 of 299 Squadron, 38 Group.

As a result of the explosion on board Sapper Hall and his comrades became the first casualties of Operation Market Garden. He is commemorated on the Double Hills memorial at the site of the crash along with the other 22 occupants of the glider.

Sapper Hall died on 17 September 1944, aged 25 years old. He is now buried in plot Y.285 at the Milton Road Cemetery, Weston Super Mare along with other soldiers killed by the crash. No family relatives have been traced by the Double Hills Memorial Group.

Profile compiled for ParaData by Harvey Grenville based on the work of Bob Williams, Peter Yeates and the Double Hills Memorial Group. 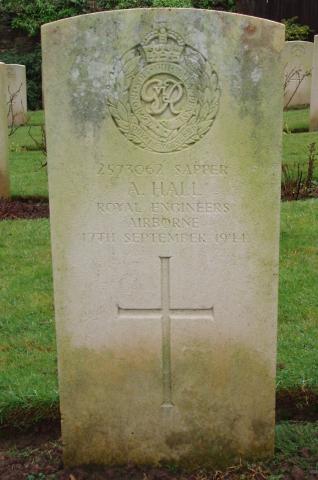