Arthur 'Chalky' White served as a Territorial in the Essex Regiment in the 1930s and was called up when war was declared in 1939. He later volunteered for airborne forces because he got "bored sitting with a machine-gun at what is now Stanstead Airport waiting for German paratroops, and I thought why not join ours".

He qualified as a military parachutist on Course 110 which ran at RAF Ringway from 3 April to 14 April 1944 and served with 1st Airborne Reconnaissance Squadron in Headquarters Troop as a despatch rider.

He took part in Operation Market Garden, as part of a divisional assault to capture the Rhine crossings at Arnhem. John Fairley's book 'Remember Arnhem' records some of Chalky White's experiences during the battle on 19 September 1944, with the 2nd Battalion isolated at the road bridge and the remnants of the divisional force maintaining a defensive perimeter around Oosterbeek:

"Nevertheless despite the sealing up of the defenders, it still remained possible for an individual to get in and out, as was demonstrated by one of the members of the Reconnaissance Squadron. On that Tuesday evening, Trooper Arthur White, a despatch rider with HQ Troop, was asked to try to take a message through to Frost. This he succeeded in doing, by leaving the Hartenstein and detouring around northern Oosterbeek, before coming down to the Bridge through the northern suburbs of Arnhem itself. It was a courageous and audacious journey, and all the more remarkable for being successful.

Nevertheless, for 'Chalky' White, the delivery of the message to 1st Brigade HQ was only half of the job, for there still remained the return journey to be undertaken, and that was to depend as much upon good luck as on his own courage and skill as a despatch rider. White remained at the Bridge for no longer than was necessary, but it was enough for him to get the impression of what he later described as a 'chaotic' situation, with defenders heavily engaged and several houses burning.

Right at the outset of the return journey, 'Chalky's' mission was almost prematurely ended when he came close to running into a mobile German patrol. There were three of them in a Volkswagen vehicle, with an MG 34 on a front mounting, and he had to take swift evasive action by riding up a narrow alleyway that ran between the adjacent buildings. There he waited briefly until the way was clear, before opening the throttle and heading west.

This time he took the more direct route by Onderlangs and near the road fork, at the junction with Utrechtseweg, he was fired at. Unscathed, he rode on but, shortly afterwards, felt his leg wet, and discovered that the German fire had punctured the petrol tank in two places. The lower part of the bike was covered in petrol and, as he ditched it, the petrol ignited and the whole thing went up in a sheet of flame. Immediately he ran off, making for the shelter of neighbouring gardens and expecting at any moment to be shot down by an unseen German. Nothing happened and so, realising that his move appeared to have gone undetected, he began to make progress cautiously on foot, in the direction of Divisional HQ. It was a journey which, in ordinary circumstances, would have taken not more than twenty minutes. Having to undertake it through back gardens and past German detachments meant that it took a great deal longer. At one stage, he found himself near a garden in which a German tank or SP gun was parked, with the crew, clearly visible, standing around the vehicle. Similar sightings of German groups were made all along the way but, eventually, after a great deal of stealth, he arrived back safely at the Hartenstein and delivered the reply to the original message."

Later Chalky along with two other squadron members (Tpr Chadwick and Cfn York) became part of the Lonsdale force. He was wounded on Thursday evening, while part of a counter attack to the west of the Church in Oosterbeek. John Fairley’s book takes up the story:

“He felt his leg go numb and since he was then unable to keep up with the others, had to lie quite still in his exposed position, listening to the spiteful zipping of the nearby German machine-guns and wondering when one of the gunners was going to put a burst into him. As it happened, he was lucky to escape any further injury and lay there throughout the twilight until darkness came. Then came the slow crawl across the road and the painful agonizing journey all the way back up the hill to Divisional HQ. It was not much more than two-thirds of a mile but, in the circumstances, it felt ten times as long, and it took several hours to get there. By then, of course he had lost touch with York and Chadwick and never saw them again. Having reported in, White was treated for a bullet wound in the shin and shrapnel fragments in his leg and side. He refused to remain in the medical aid post, and was able to report in to Squadron HQ on the following day, where he joined Trooper Alan Samm in a slit trench in the field just west of Oranjeweg.

Although wounded, this stubborn determination to remain in the fray combined with good fortune meant that he evaded capture by the Germans. On the night of 25/26 September he withdrew across the Rhine with the remnants of the 1st Airborne Division to safety and Allied lines.

After returning to the UK he was deployed to Norway with the remaining members of the troop, for Operation Doomsday to oversee the surrender of the German occupation forces and maintain law and order. While in Norway he and another despatch rider took the surrender of 3 U Boat crews.

After the war 'Chalky' became an aircraft mechanic and settled in Southend. For a long while he was one of the organisers of the South East Essex Branch of the Parachute Regimental Association.

Compiled by Harvey Grenville with the assistance of Neil White 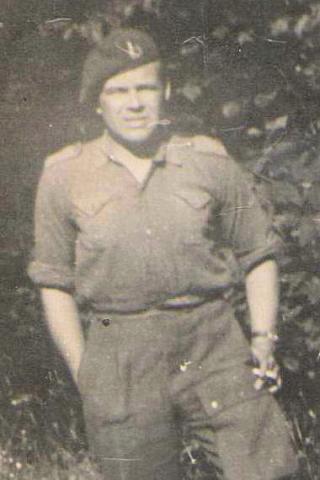