Bill Applin was born in Gooseberry Hill, Perth, Western Australia in 1922. He travelled to England in 1938 to join the British Army and enlisted under age. He saw action at Dunkirk and North Africa before volunteering for Airborne training. He saw action in Sicily where he was buried by gunfire, the trauma of this was to stay with him in flashbacks for the rest of his life.

He fought with 2nd Para Bn, The Parachute Regiment at Arnhem where he was taken prisoner at the bridge. After the war he joined The Royal Warwickshire Regiment in 1950 and was posted to 1st Bn The Royal Leicestershire Regiment in Hong Kong, where as a LCpl he was a member of the 1st Bn Boxing Team in 1951. He was awarded the MM for his actions as a Section Commander in D Coy, 1st R Leicesters, in Korea on 5 November 1951, and he was wounded during this action. He is shown here being presented with his MM by Maj-Gen Cassels in Korea on 22 June 1952. In 1952 he returned to 1st R Warwick.

Bill Applin left the Army in 1958 and moved into the Insurance Industry, from there to work as a draughtsman for Avon Rubber Company. In 1963 he returned to the land of his birth with his English wife and three children. He worked for the West Australian Railways in Morawa.  It was while he was there the local school principal became aware of his musical talents and employed him to work with the school band. From there he attended Secondary Teachers College and began teaching the Manual Arts (wood and metal work and technical drawing) in the Secondary School.

He attended Curtin University and completed a Bachelor of Arts Degree (BA), majoring in Australian Literature. He died in 2007, aged 84. He is survived by his widow Jan and four children of his first marriage.

Created with information an image kindly supplied by R Hilton. 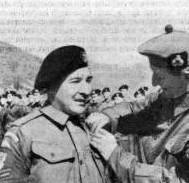