Arthur Francis Oakey was born around 1914, the son of Francis and Elizabeth Oakey; and husband of Dorothy May Oakey, of Liverpool. Nothing else is known of Arthur’s family background and no relatives have been traced by the Double Hills Memorial Group.

Arthur was a pre-war regular and served in 9 Field Company in France and Belgium in 1939/40. The Company was deployed in the rearguard actions protecting the Dunkirk evacuation and, on 31 May 1940, they occupied foxholes at Rosendael on the outskirts of Dunkirk. German shelling was continuous and sadly nine members of the unit were killed or wounded by one shell. The 9th evacuated to the beaches where they boarded a Grimsby trawler and stepped on to British soil early on Sunday, 2 June; it became scattered but reformed by the end of June at Monmouth. A move to Chipping Sodbury, Gloucestershire, quickly followed and in August 1940 they were ordered to Bere Alston on the outskirts of Plymouth. Here they sustained casualties during the frequent air raids whilst clearing bomb damage and maintaining essential services. Between September 1940 and January 1941 the Company was based at Bude, engaged in laying mine fields and erecting defences along the coast. The 9th then moved to Wallingford where they took part in exercises until mid-summer when they re-located to Ilminster, and were at Wiveliscombe by the end of the year.

Early in 1942 the Company was selected to train as an airborne unit and during the period of transition was stationed at Bulford. By May 1942 they were re-designated as the 9th Field Company R.E. (Airborne) and, on 19 June 1942, became part of the 1st Airlanding Brigade, 1st Airborne Division. All personnel in the Company were trained as glider-borne troops. A significant proportion of the Company’s strength also trained as parachutists at Ringway, Manchester; their drop zone being at Tatton Park, near Knutsford. Course 14 which ran from 25 May 1942 to 4 June 1942 included 40 men from 9 Field Coy, 38 qualified as parachutists. Other men from the Company followed on later courses. Arthur attended Course 19 which ran from 20 July to 27 July 1942 in an intake of 11 officers and 125 other ranks from Air Landing Brigade and 11 other ranks of the Parachute Brigade. He qualified as a parachutist on this course by completing 2 balloon jumps and 2 aircraft jumps from a Whitley.

Twenty volunteers from the Company were amongst the forty-one who died during the ill-fated, glider-borne Operation Freshman on 19 November 1942 to destroy a heavy water plant in Norway. (See separate account on ParaData).

On 16 April 1943 the Company sailed from Gourock, on the River Clyde, in the liner Boissevain bound for North Africa. It is known that Arthur had been promoted to Sergeant by the time he sailed to North Africa. On 9/10 July 1943, the Company, as part of the 1st Airlanding Brigade, was engaged in Operation Ladbroke, the first of two hazardous glider landings in Sicily. Some men from the 9th assisted in the capture of the Ponte Grande bridge near Syracuse and others in the Company dealt with coastal defences which could be an impediment to the main invasion force. After being relieved by the advance spearhead of the invasion force, on 16 July, they were taken back to Tunisia in Infantry Landing Craft.

On 8 September 1943, the whole Company sailed from Bizerta in the American cruiser U.S.S. Boise for Operation Slapstick, as part of the invasion of mainland Italy, and during the voyage they learned that the Italian forces had capitulated. They landed at the port of Taranto and for the next month they carried out various tasks including repairs to the dock and mine clearance. The 9th later moved forward with the advancing forces and on occasions small parties operated behind enemy lines cutting railway lines thereby denying the Germans reinforcements and supplies. A detachment of eight Sappers under Corporal Roy Allen sailed in an Infantry Landing Craft to Salerno where they cleared about 700 mines from the beaches. During October Arthur helped to run several NCO cadres.

Just after 10.00 hours on Sunday 17 September 1944 sixteen glider and tug combinations took off from RAF Keevil for Arnhem as part of Operation Market Garden. Horsa Glider RJ113 (Chalk 389) was in this group of aircraft and contained 21 men, including Arthur Oakey, from No 1 Platoon 9th (Airborne) Field Company Royal Engineers. The glider was flown by S/Sgt L J Gardner and co-pilot Sgt R A Fraser from D Squadron, The Glider Pilot Regiment. It was towed by a Short Stirling, No. LK 148 of 299 Squadron, 38 Group.

As a result of the explosion on board Arthur and his comrades became the first casualties of Operation Market Garden. He is commemorated on the Double Hills memorial at the site of the crash along with the other 22 occupants of the glider.

Sergeant Oakey died on 17 September 1944, aged 30 years old. He is now buried in plot Y.289 at the Milton Road Cemetery, Weston Super Mare along with other soldiers killed by the crash. 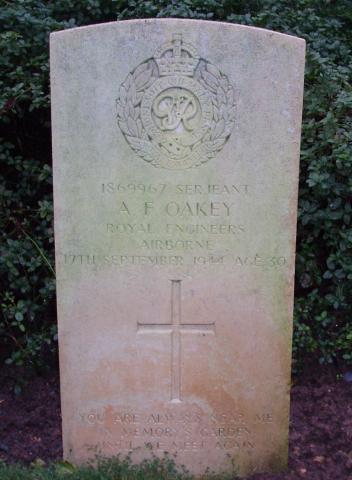