Sergeant Arthur Douglas Ecott was the son of Walter and Amy Ecott and husband of Marjorie Ecott, of Taunton, Somerset.

He enlisted into the Royal Artillery and later volunteered for airborne forces. He qualified as a miltary parachutist on Course 98 which ran at RAF Ringway from 10 to 21 January 1944 and was posted to the 9th (Essex) Parachute Battalion.

The battalion was tasked with destroying the Merville Battery in advance of the main Normandy landings on 6 June 1944. It went on to occupy positions at Le Mesnil and then Ecarde, until 20 July when it moved to the Triangle, an area bounded by Toufreville, Ranville and Breville.

Sergeant Ecott died while the battalion occupied positions in the Triangle on 23 July 1944, aged 24 years, and is buried in Ranville War Cemetery, Normandy. 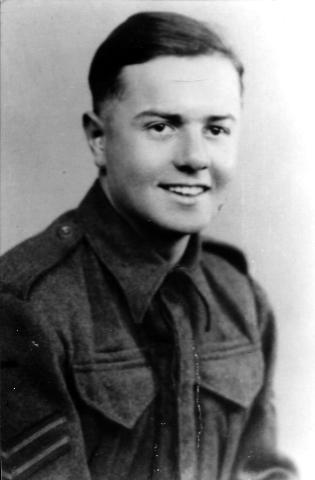