Arthur Charles Main was born on the 11 September 1924, and came from Salisbury, Wiltshire, and was working as a gardener when he was ‘called up’.

He enlisted into the Royal Regiment of Artillery on the 3 December 1942, and was sent to the 10th (Light) Anti-Aircraft Training Regiment, RA on the 13 January 1943. After completion of his basic training he was sent to other training establishments to qualify fully as an anti-aircraft gunner.

On the 17 July 1943, Gunner Arthur Main was posted to the 2nd Airlanding Anti-Aircraft Battery, R.A. (T.A.) and granted additional pay for Airborne Duties. Under the command of Major. W.A.H. Rowat, R.A. the Battery’s primary function was to provide anti-aircraft defence to the 6th Airborne Division.

On the 25 August 1944, he qualified for parachute pay after completing Parachute Course No 127 at RAF Ringway, 29 July to 12 August 1944. This was a ‘conversion course’ for the main part of the Battery, where 6 Officers and 100+ Other Ranks attended. His Parachute Instructors comments: “Good performer, became confident and keen. Good morale”.

Along with part of the Battery (the Air Party, consisting of 8 Officer and 148 Other Ranks), Gnr. Main, embarked at Saltby aerodrome for North-West Europe on the 26 September 1944. This was part of Operation ‘Market-Garden’, and they landed at an airstrip near Grave at 13.30 hrs. On the 30 September, six of the Battery’s guns were pulled out from the defensive task at Grave, and moved to defend the British 1st Airborne Corps H.Q. at Nijmegen.

All personnel surplus to gun detachments moved to a harbour area at Wijchen. The defence task they were employed upon took until the 9th October, when they moved to the docks at Ostend in Belgium and embarked for return to the UK on the 13th October, which they reached the next day. After disembarking at Tilbury Docks they returned to Bulford.

On the 24 November 1944 the Battery vacated Marlborough Barracks in Bulford and moved to new quarters at Monkton Farleigh, Corsham Garrison, in Wiltshire. In December 1944 it was decided that there was no longer any need for an Air landing Light Anti-Aircraft Battery, and the it was used to provide the nucleus for two Air Landing Anti-Tank Batteries, the 5th and the 6th. Accordingly Gnr. Main was officially posted to the 5th Air Landing Anti-Tank Battery, RA on the 19th February 1945, which was commanded by Major. HJN Gillam, RA 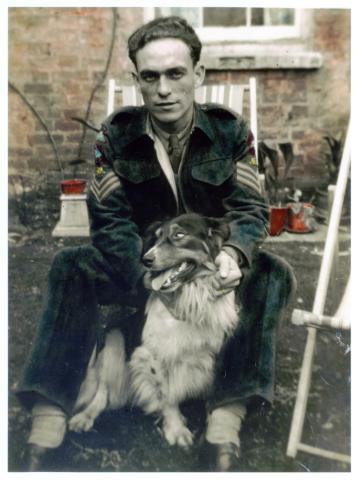