Private Arnold Richard Archibald was the son of William Richard and Jessie Vallance Archibald, of Seaforth, Ontario, Canada. He served with the 1st Canadian Parachute Battalion, Royal Canadian Infantry Corps, which was formed in the second half of 1942.

As a result of an arrangement with the British Army the Battalion sailed to the UK in Summer 1943. It was attached to 3rd Parachute Brigade, under Brigadier James Hill, in the 6th Airborne Division and garrisoned in Bulford, Wiltshire.

Pte Archibald jumped with the Battalion into Normandy, France, between 00.30 and 01.30 hours on 6 June 1944 for the allied invasion of mainland Europe.

The Battalion was given the responsibility of protecting the left flank of the Brigade’s drop zone and tasked with 3 missions in the Robehomme-Varaville-Le Mesnil sector.

Once it had completed these missions the Battalion moved on 7 June to take up new positions protecting Le Mesnil crossroads which stood on a ridgeline between the Dives and Ornes rivers. Pte Archibald died during the Battalion’s defence of this critical road junction. 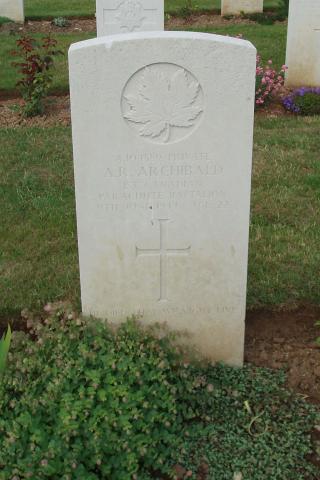