Archibald ‘Archie’ John Bookless was born in Ningpo, China, and educated at Loretto School, near Edinburgh.

He was granted an emergency commission with the Queen’s Own Cameron Highlanders in March 1940 and later volunteered for airborne forces, transferring to The Parachute Regiment in July 1943.

Archie Bookless subsequently served with 8th Parachute Battalion, initially as adjutant and then as a company commander during the campaigns of north west Europe in 1944-45. His actions were recognised by the award of a Military Cross in January 1946. The citation records:

“Major Bookless began the campaign in NW EUROPE as adjutant of the Bn when it dropped on June 6th 1944 in Normandy. Within a month he had been promoted a major and put in charge of a coy. During the trying weeks sitting in the Bois de Bavent in a defensive position covering the right flank of the British sector his cheerfulness and disregard of enemy fire did much to sustain and encourage the men under his command. On Aug 17th the Bn began its move leading the Division across the R Dives. Maj Bookless commanded the leading company, with great dash and enthusiasm and with complete disregard for the possible danger ahead he made a breakthrough of eight miles, thus ensuring the success of the Brigade. In the subsequent actions on the advance to the Seine his leadership and fearlessness were beyond praise.
In the German breakthrough in the Ardennes he was 2i/c and for a time commanded the Battalion. In the difficult days in January his endurance was an example to all under his command.
Finally he took part in the Parachute operation of the Rhine in March 1945, and from the time he dropped as a pathfinder for the Brigade to the day that the Bn reached the Baltic his command of his company was at all times outstanding and contributed greatly to the success of the operation.
In all actions in Normandy, the Ardennes, in Holland, and in Germany Maj Bookless’ courage and leadership have been of a very high order."

After the war he qualified as a chartered accountant in Scotland, and later ran a tractor importing business in Calcutta.

In 1954 Archie emigrated to Canada where he eventually became a chartered insurance underwriter.

Major Bookless passed away peacefully in Ottawa, Canada in his 90th year. 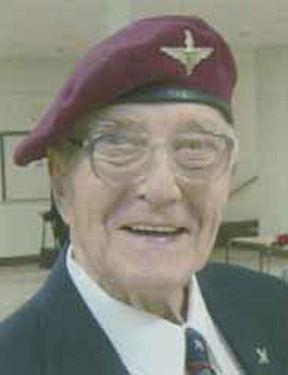