Corporal Anthony Bertram Lloyd was the son of Bertram Harold and Ada Lloyd, of Penarth, Glamorgan.

Records indicate that he enlisted into the Royal Welch Fusiliers and it seems likely that he was serving with the 10th Battalion RWF when it was turned over to airborne duties in August 1942. The Battalion was renamed the 6th (Royal Welch) Parachute Battalion and became part of the 2nd Parachute Brigade.

Elements of this Royal Welch Parachute Battalion reinforced the 1st Parachute Battalion in early 1943 while No 1 Parachute Brigade was fighting axis forces in the Bou Arada sector, North Africa, during Operation Torch. On 5 March the Brigade handed this sector over to the Americans and moved to the Tamera Valley (Tunisia).

On 8 March an enemy force of divisional strength attacked the defensive positions of the 1st and 2nd Battalions. Tony Lloyd was later awarded the Military Medal for his actions on this day and his citation reads:

“On the 8th March 1943 in the Tamera Sector, Tunisia, Private Lloyd was a member of a counter-attack Company. During the advance Private Lloyd and two other men became separated from their platoon. They came under heavy machine gun fire and Private Lloyd ordered the two men to cover him while he himself attacked the post. He charged over country showing a complete disregard for his own safety and succeeded in capturing the machine gun post and three men. By this act of gallantry Private Lloyd prevented severe casualties being inflicted to the Company which was advancing.”

After North Africa the Battalion saw intense action in Sicily. This was followed by sea-borne landings at Taranto, Italy, in September 1943. The Battalion advanced as far as Foggia before being withdrawn back to the UK for D Day preparations.

On 28 March 1944, Tony was one of ten members of the 1st Battalion to receive their Military Medals, all awarded for actions in North Africa, at Buckingham Palace (see photo).

On Sunday 17 September 1944 the Battalion jumped onto Renkum Heath as part of the Divisional assault to capture the Rhine crossings at Arnhem in Operation Market Garden. By this time Tony was 2 i/c of 8 Section, No 11 Platoon, T Company.

The Battalion sustained severe casualties in the area of Den Brink and the Queen Elizabeth Hospital trying to reach the 2nd Battalion cut-off at the Arnhem Bridge, and Tony, along with the remnants of the Battalion, was forced to retire to the Division perimeter that became besieged at Oosterbeek.

Tony is believed to have been wounded in the fighting at Oosterbeek in the area of the Regimental Aid Post at Kate ter Horst’s house. He died from his wounds and was one of 57 airborne soldiers given a field burial in the house’s gardens.

He died on 26 September 1944, aged 21 years old, and is now buried at Oosterbeek War Cemetery, Arnhem. 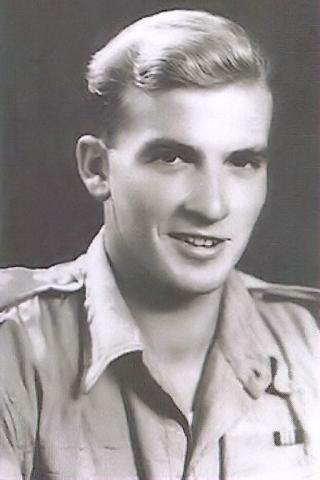