Andrew Douglas Harper was born in Peebles in 1924. He attended George Heriot’s School and joined the 43rd Midlothian Scout Troop.

He joined the City of Edinburgh Battalion Home Guard, before volunteering for the Royal Artillery in 1942.

In 1943 2nd Lieutenant Harper was commissioned into the 53rd (Worcestershire Yeomanry) Airlanding Light Regiment. He attended a parachute training course at RAF Ringway in 1944.

In June 1944 Lieutenant Harper dropped into Normandy, travelling from Caen to the ailed break out at the river Seine. He returned to the UK in September, returning to Europe in December 1944 to help with the unexpected German break out in the Ardennes.

In March 1945 the 53rd Airlanding Light Regiment took part in the Rhine Crossing, and Lt Harper accompanied the Regiment in the advance to the Baltic.

In the summer of 1945, Lt Harper travelled to India to the Jungle Warfare Training Centre before travelling on to Palestine in October 1945.

He returned to the UK nearly a year later, volunteering for an Air OP Flying course before being posted to the British Army on the Rhine.

Lt Harper was demobilised in June 1947.

By Rebecca Blackburn with information supplied by Andrew Harper 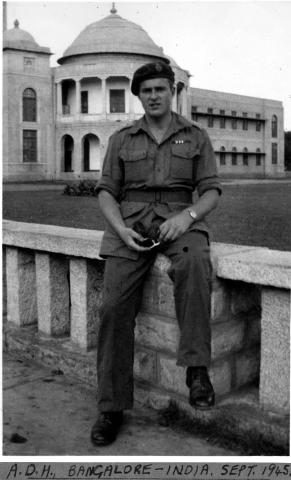