Andrew ‘Drew’ Brown was born in Blinkbonny in the Northumbrian Borders in November 1919, and after leaving school in Coldstream worked as a Bothy Boy in the gardens of stately homes at Ford, Lennel and Musselburgh.

At the outbreak of war in 1939, Private Brown served with the Kings Own Scottish Borderers before transferring to the Glider Pilot Regiment. In September 1944, flying a Horsa glider carrying a jeep and five soldiers, Sergeant Brown took part in Operation Market Garden.

The following obituary was written by his son, Len Brown:

After landing, Drew and his men were trapped near Oosterbeek, hoping and praying that help would arrive. ‘We were completely surrounded,’ he recalled, ‘being shelled all the time, and because of the breakdown in intelligence, we watched as 90 per cent of our supplies went over our heads and dropped straight into German hands.’

We kept being told we’d be relieved, but the help never arrived. By the Thursday and Friday we felt we’d been left there, to die or be taken prisoner. We just kept our heads down in the trenches praying that the moaning minnies (German rockets) wouldn’t get us.’

After suffering terrible casualties, including the defeat of Lieutenant-Colonel John D. Frost’s battalion at Arnhem Bridge, Montgomery acknowledged his plan had failed and ordered the rescue of the British troops.

‘Most of the attempts to rescue us came to little,’ he recalled. ‘The bad weather prevented much air support although I remember one day watching Polish parachutists dropping from the skies. They were just hanging there while the Germans picked them off. It was like shooting pheasants. Some of the Poles that survived were so terrified they couldn’t move or speak. It was heart-breaking to watch and we could do nothing. After a week of constant fighting without rest we were all totally exhausted.’

Lightly equipped and having suffered heavy casualties, the remnants of 1st Airborne in the Oosterbeek perimeter increasingly feared the worst. During the bombardment, Drew carried one of his seriously wounded colleagues, Dixie Dean, down from near the Hartenstein Hotel to the Old Church towards the river. ‘He had serious shrapnel wounds to his chest. But when I went in the church, it was so calm compared to the world outside. All I could hear were the wounded and dying desperately whispering The Lord’s Prayer. It was so moving, so terrible.’

By crawling through woods down to the Old Church at Oosterbeek, Drew was among the lucky few who escaped back across the Rhine in a ferry boat on the night of September 26 1944, just over a week after his glider had landed. Drew himself was wounded in the exodus, with shrapnel in his left shoulder, and later had to be temporarily patched up in Nijmegen.

It was only when he arrived back at his base at Ramsbury that he realised the scale of the disaster: ‘They’d made up the beds for the whole of our squadron, but there were only nine of us left. We just sat on the bunks, looked around and prayed. It was and still is shocking to contemplate what happened to those young men.’

But within weeks of Arnhem he was patched up and sent off to Belgaum, India, to join 671 Royal Air Force Squadron flying supply missions in the fight against the Japanese in Burma.

He was Mentioned in Despatches for excellence shown in the face of the enemy and ‘demobbed’ in May 1946.

During his time in the forces Drew enjoyed considerable success as a boxer and footballer for his battalion. And as a skillful wing-half, he played for Coldstream, Berwick, Edinburgh and York before and after the war.

In peacetime, he developed his interest in horticulture at the Botanic Gardens in Edinburgh, where he met the love of his life, Janet MacLarty. They married in Taynuilt Argyll in 1955, had three children – Kath, Len and Don – and Drew pursued his career as a horticultural advisor for the Ministry of Agriculture until his retirement in 1982.

After a serious illness in 2010 he moved down to stay near his son in Nottinghamshire where he spent the last three years of his life; stress-free, content and well-looked-after in Southwell Court Care Home.

By Rebecca Blackburn with information supplied by Len Brown 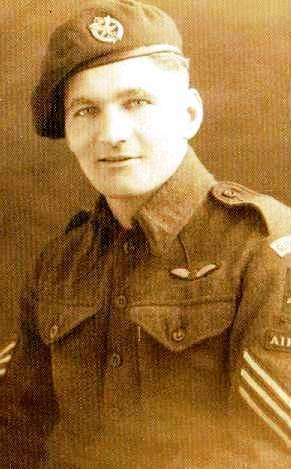