He enlisted into the Army and was commissioned into the King's Royal Rifle Corps on 22 May 1943. In 1944, Lieutenant Austin was transferred to the Anti-Tank Platoon, HQ Company, 12th (Green Howards) Parachute Battalion.

During the Normandy Airborne landings on D-Day, during Operation Overlord, it was the job of the 12th Battalion to capture the village of Ranville. On 6 June 1944, troops landed by glider and parachuted into the area around Ranville, some missing the drop zones and coming up against German patrols.

Lt Austin was reported as missing in the Battalion war diary soon after the drop, along with three other officers, and 100 other ranks. He is recorded as dying on or after 6 June 1944, aged 20, and is now commemorated on the Memorial at Bayeux War Cemetery, Normandy.

An obituary in his school magazine read: 'Ambrose Theodore Wentworth Austin, Lieutenant, Parachute Regiment, came from Hordle House. He will be remembered most of all perhaps for the happy disposition which made him a host of friends, for the soundness that made one feel he must automatically by-pass what was second rate, and for the perfect form of his tackling on the footer field. He was a keen rider, and on leaving Oxford to serve he quickly went into a Parachute Regiment. He was dropped 'on the bridge' on 'D' Day and has not been seen or heard of since. There can be no real hope of his survival. In his short life he showed a courage and an outlook on life which will be an abiding example to his friends.'

The Shirburnian, July 1945. Reproduced by kind permission of R Hassall. 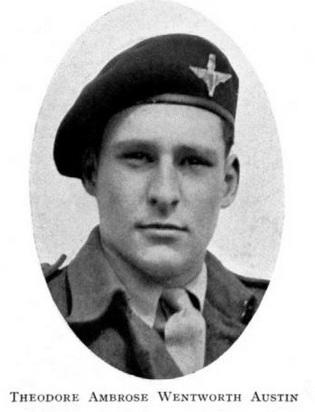