Sergeant Allan George Reading enlisted into the Warwickshire Regiment and was serving with the 13th Battalion as a Lance Corporal when it was turned over to airborne duties to become the 8th (Midlands) Parachute Battalion, part of the 3rd Parachute Brigade in the newly formed 6th Airborne Division in 1943.

After training at Hardwick Hall he attended Parachute Training Course 44 which ran at RAF Ringway from 28 December 1942 to 8 January 1943. The course notes record that he was "a good performer. Great interest shown throughout the course."

By June 1944 he was serving as the Platoon Sergeant for No 1 Platoon A Company in the 8th Battalion.

He parachuted with the battalion into Normandy, near Sannerville, which was tasked to blow up two bridges and protect the beachheads. With the bridges destroyed, the 8th Battalion then held the Bois de Bavent woodland and harassed enemy troops in the area.

The battalion was subject to several German attacks during this period and on 16 June elements of the battalion, including A Company, were subject to a heavy attack. For his actions on this day Sgt Reading was later awarded the Military Medal. Confirmation of this award appeared in the London Gazette on 19 October 1944.

His citation records:
"For outstanding leadership and courage. At Le Mesnil on the 16th June, Sergeant Reading was the Platoon Sergeant of a forward Platoon which was attacked continually by the enemy for a period of 8 hours. During that period Sergeant Reading moved from one section position to another under heavy mortar and machine gun fire to where the enemy was pressing the hardest. Sergeant Reading showed a complete disregard for his own safety and his courage and leadership was an inspiration to all before eventually he had his hand blown off."

Allan was a musician and had formed a trio with two of his 8th Battalion comrades,  Maurice Alfred Tisdale (“Tizzy”) and John William Evans (“Jackie”). Tizzy broke his arm in the period leading up to Overlord, and was told he could not go. He made a fuss about this, and was eventually allowed to go in a glider, with orders to raise a flag on a church. Unfortunately, both men were killed during the first week of the campaign..

Sometime in the early 1970s, Allan responded to a request in a newspaper for anecdotes relating to the invasion for a book called “D-Day” authored by Warren Tute, John Costello, Terry Hughes, Jonathan Moore,  and Judy Harkison  (ISBN 0 283 98144X). His submission was accepted and can be found on page 149:

“We took off from Lyneham [Editors note this should read Blakehill] aerodrome on the night of 5th June. Somebody - I think it was the Padre - had the bright idea of getting a piano to keep the lads amused while we were waiting. A driver, called Jack Young, found one from somewhere and brought it in his truck to the airfield. As I could play a bit, I was detailed to play a few tunes and we had a sing-song alongside the waiting planes. When the time came, we climbed into the aircraft and flew off to France to play our part in the invasion, leaving the piano in the middle of the airfield………it seems that next morning Jack Young went back to the airfield to collect it, but the piano had completely disappeared. He searched everywhere but could not find it. He said I must have taken it to France and flogged it………”.

Compiled by Harvey Grenville with the kind assistance of Colin Reading 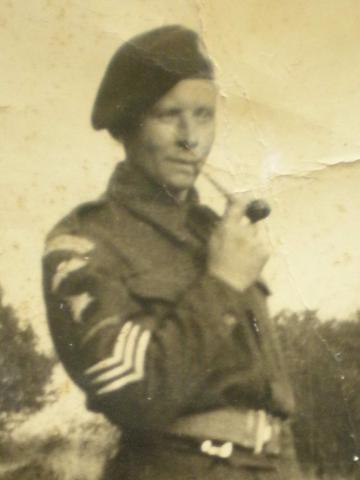