Allan Connel MacDonald was the son of Allan and Margaret MacDonald, of Oban and the husband of Margaret MacDonald, of Hawick, Roxburghshire. He lived at 121 George Street Oban and enlisted in Oban on 6 February 1939 into the 204th Battery of the 51st (West Highland) Anti-Tank Regiment, Royal Artillery, Territorial Army. On the 10 October 1942 the 204th Battery converted into the 2nd (Oban) Airlanding Anti-Tank Battery RA.

In North Africa from 13 April 1943 to 4 January 1944 and during this period took part in the Taranto landings in Italy.

Sergeant MacDonald successfully completed parachute training at RAF Ringway, on course number 14 from 25 May to 4 June 1942 and also completed glider training at RAF Stoke Orchard, Gloucestershire on 20 October 1942. He was then sent for wireless instruction on the number 18 and 38 Radio Sets which he completed on 8 December 1942.

He was listed as missing on 26 September 1944, and later confirmed as being a POW in Germany. He returned to the UK on 6 April 1945, and died of malnutrition at the American Hospital, Stockbridge, the next day, 7 April 1945, age 31. He is buried at Oban (Pennyfuir) Cemetery.

If you are part of Sgt MacDonald’s family and would like to complete this biography, you can apply to the Curator to do so. To do this you will need to become a member of ParaData and select the 'friend or family member' option on the registration form.

By Rod Gibson with additional information and photo from Bettina MacDonald, Granddaughter. 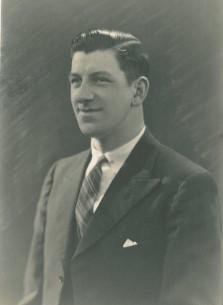