A legendary figure within The Parachute Regiment, Alistair Pearson is regarded by many as one of its finest battalion commanders. By the age of 29 he had commanded two battalions and won 5 gallantry awards in less than two years through some astonishing feats of arms. He was fiercely dedicated to his soldiers inspiring loyalty and respect in return.

After leaving school in 1932 he started as an apprentice at his Uncle’s bakery in Glasgow and joined the Territorial Army (6th Highland Light Infantry) as an officer. His unit was mobilised in 1939 and Pearson served twice in France in 1940; latterly as part of the 2nd British Expeditionary Force when his unit was evacuated from Cherbourg.

He joined the Paras at the formation of No 1 Parachute Brigade in 1941.

Deployed with 1st Para Bn as part of Operation Torch, an allied offensive to dislodge axis forces in North Africa, Pearson found himself in charge of the battalion at the ripe old age of 27 after the Commanding Officer (Lt. Col. James Hill) was wounded in an attack on enemy forces at Gue Hill in Tunisia.

Pearson was awarded a Military Cross and the Distinguished Service Order (DSO) twice for his gallantry and outstanding leadership during the fighting in Tunisia.

He was awarded a 3rd DSO for his actions in the fighting to take Sicily but by now Pearson was suffering badly from the affects of malaria and after two weeks in hospital was sent to convalesce in Sousse. He was posted to 6 Airborne Division after he had recovered; his talents were quickly put to good use as CO of the 8th Parachute Battalion, which was in poor shape when he took over, and prepared them for combat.

The battalion jumped at D Day (6 June 1944) and fought the Germans solidly for 3 months, eventually leading the breakout of the 3rd Parachute Brigade over the Dives. He was subsequently awarded a 4th DSO for his part in the Normandy operations.

Pearson got married immediately on his return. However, the recurring malaria aggravated by the dampness in the Normandy marshes had finally taken its toll; he was forced to relinquish his command of the 8th Battalion and formed the Parachute Regiment Reserve Battalion in Yorkshire at the turn of 1944-45.

He declined the opportunity to stay on in the Army after hostilities were concluded. However, shortly after the war he rejoined the TA and held several senior appointments. In 1967 he was promoted to Brigadier and became Commandant of the Army Cadet Force in Scotland.

In civilian life, after a brief return to the bakery business he and his wife established a farm on the banks of Loch Lomond which they ran for many years. He also held a number of civic posts over forty years. He was awarded an OBE in the early 1950s and made a Companion of the Order of the Bath (CB) in 1958. He was also awarded the Territorial Decoration and 3 bars for his service to the TA and the Cadet Forces Medal in 1981.

A TRIBUTE TO ALISTAIR PEARSON BY MAJ GEN JOHN FROST

COLONEL ALASTAIR PEARSON joined the 2nd Parachute Battalion from the HLI in September, 1941. He acted as Second-in-Command for a short period before taking over a company in the 1st Battalion.

A legendary figure within The Parachute Regiment, Alistair Pearson is regarded by many as one of its finest battalion commanders. 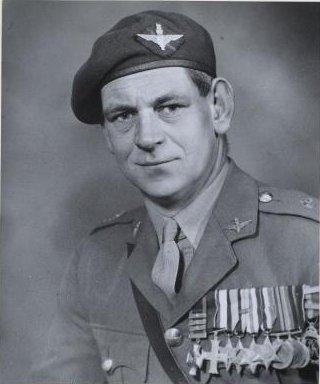