Alistair David Stewart Lawrie enlisted into the regular army in 1959.

After volunteering for airborne forces Private Lawrie took part in parachute training course 456 at RAF Brize Norton. The course lasted from 16th October - 17th December 1957. It was noted that Pte Lawrie was "A good pupil who worked hard to complete the course". Upon successful completion of the course, Pte Lawrie was posted to 1st Battalion, The Parachute Regiment (1 PARA).

Alistair served in D Coy, 1 PARA from 1958 until 1972. During this time, 1 PARA served with the Bahrain garrison between 1962-3 and a UN peace-keeping tour in Cyprus in early 1964 before returning to Bahrain again in 1965 and 1966. It was during this time that he completed his Jungle Warfare Course. In 1967 he went on to serve with 1 PARA in Malaya.

Following this he did his SNCO course in early 1968 at the Infantry Battle School in Brecon, Wales and rounded off his service with 1 PARA until 1972.

In 1972, WOII Lawrie served with 15 PARA as part of the BAOR and saw another spell in Northern Ireland the following year. Alistair then spent two years with D Coy, 3 PARA before finishing his career in Depot PARA and the Army Apprentice College, REME from 1975-79.

Alistair sadly passed away in December 2018.

Note: Alistair's profile picture was taken in Cyprus in 1964 during his time there with 1 PARA. He is holding two scared Cypriot children he just rescued. 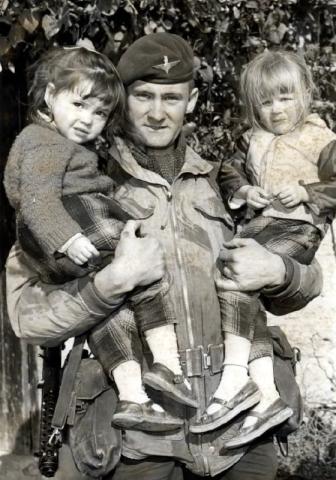