Alfred Reynolds, son of Alfred and Martha Reynolds, of Wolverhampton, enlisted into The South Staffordshire Regiment and later volunteered for airborne forces during World War II.

He served in No 3 Platoon R Company, 1st Parachute Battalion, which took part in the Battle of Arnhem, during Op Market Garden, and parachuted onto DZ-X on Sunday 17 September 1944.

After leaving the DZ,  the battalion attempted to reach the Amsterdamseweg, but encountered a German armoured patrol north of Wolfheze. Cpl Reynold's platoon became heavily engaged with the enemy, as his company were leading the battalion advance, under the command of Major John Timothy. R Company continued to engage the enemy, allowing the remainder of the battalion to move in a south easterly direction towards Arnhem bridge. As result of this engagement R Company sustained 50% casualties.

Somewhere around this time, Corporal Reynolds' picture was taken along with three other members of No 3 Platoon in a shell hole, The photograph is attributed to have been taken in Wolfheze on 17 September, and has susbequently became a widely published image of the battle.

The indications are that Corporal Reynolds survived this contact, and moved with the remnants of R Company to catch up the remainder of the battalion. Having linked up with the South Staffs, a very depleted R Company, now down to less than 40 men, eventually rejoined the 1st Battalion at around 20:00 hours on Monday evening close to the river in the area of the St Elizabeth Hospital on the western outskirts of Arnhem.

The battalion commander, Lt Col Dobie, in conjunction with The South Staffs, 11th Battalion and remnants of the 3rd Battalion,  planned a last ditch assault to break through the German blocking line to reach the beleagured 2nd Battalion at the bridge. The circumstances of Cpl Reynolds' death are not exactly known but it seems likely that he died during this organised assault to reach the bridge. 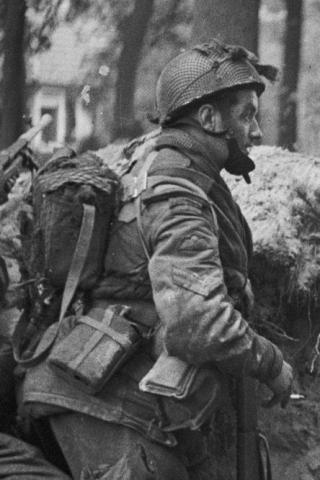