Alfred Milton enlisted into the Durham Light Infantry and volunteered for airborne forces in early 1945.

Pte Milton attended parachute training course B156 at RAF Ringway from 12 to 26 March 1945 but sprained his ankle on the third jump. When recovered he passed course B159 which ran from 2 to 13 April 1945. The course report states: ‘Keen and hardworking, completed the course confidently and well.’ Pte Milton was posted to the 2nd Parachute Battalion.

Pte Milton died aged 21 years in Palestine on 25 October 1947 when the lorry he was travelling in collided with another military vehicle, killing fourteen military personnel. He is now buried in Khayat Beach War Cemetery, Israel. 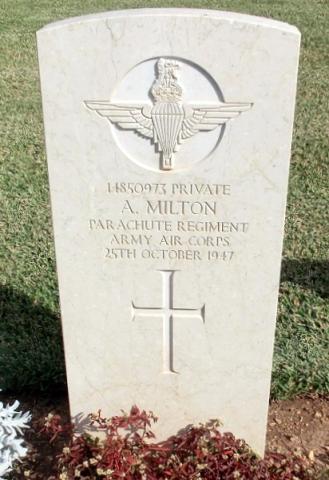