Alfred J McKie enlisted into the General Service Corps and volunteered for airborne forces from Royal Scots Fusiliers in May 1945.

Private McKie qualified as a military parachutist on Course B167 which ran at RAF Ringway from 11 to 23 June 1945. He was initially posted to No 1 Airborne Forces Holding Unit until an eventual posting to the 2nd Parachute Battalion.

Pte McKie served in Palestine. He was demobbed in December 1947. 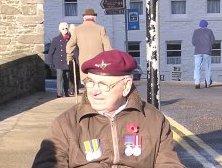 JOHN MCKIE said:
My dear Dad died on 24/07/16, aged 90.I could not have wished for a better father.Much respected and loved by all his friends and family."Every man an emperor". John McKie
Add your comment