On 18 May 1935 he enlisted into the Royal Ulster Rifles. The Brigade was re-designated as the 1st Airlanding Brigade in 1941, to undertake assault by glider.

He was then transferred to the Essex Regiment in April 1943 with an emergency commission as 2nd Lieutenant.

In February 1944 Lieutenant Forrester was transferred back to The Parachute Regiment and saw service in the Far East. He also served with a Pathfinder Platoon.

Captain Forrester was demobilised in 1948. 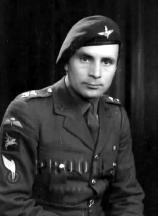