Alfred ‘Alf’ Cook was born on the 9 January 1917, and came from Goole in Yorkshire, and joined the Territorial Army (King’s Own Yorkshire Light Infantry) in 1934. Shortly before the outbreak of war, 1 April 1939, he joined the Regular Army and transferred to the Royal Artillery, where he was assigned to the 91st Anti-Aircraft Regiment, RA He served with them until the 21 February 1941, when he joined the Army Physical Training Corps.

The following year he volunteered for Airborne Forces and qualified as a military parachutist, as part of a cadre of ten Sgt Instructors from the APTC, on course 42, which ran at RAF Ringway in December 1942.

The following year, 10 May 1943, he was attached to 1st Light Battery RA (Airborne), later to become 1st Airlanding Anti-Tank Battery RA, and deployed to North Africa with them on the 16 May 1943.

While working as an assistant parachute jump instructor on a flight in August 1943, one of his trainees (Pte Trevor) jumped and had a hang up, resulting in Pte Trevor being suspended in the aircraft’s slipstream.

Trevor later recounted that while in this position he had abandoned all hope, spread eagled by the terrific force of the wind currents. Bearing in mind that in those days British paratroopers did not wear reserves and, had the static line failed, Trevor could have fallen to his death. Equally, it was highly unlikely he would survive any attempt to land the plane with him still attached and initial attempts to haul him back into the aircraft failed against the overwhelming force of the slipstream.

In an outstanding and hair raising act of bravery, Sgt Instructor Cook shimmied down the static line to the unfortunate trainee while the aircraft was flying at about 800 feet. Sgt Cook attempted to free Trevor from his perilous situation while gripping him with his feet. However, the buffeting and twisting in the slipstream resulted in his own parachute starting to entwine round that of Trevor. Realising his predicament Cook made one final effort to free Trevor as he released himself. Cook was fortunate not to have a partial canopy collapse on the way down as five of the rigging lines on his parachute had been severed in the mid air melee with Pte Trevor.

Although Cook’s efforts to free Trevor were ultimately unsuccessful, this exceptional act of bravery resulted in Cook being awarded the George Medal later that year. Fortunately, the unlucky paratrooper was later hauled back into the aircraft.

Still with the 1st Airlanding Anti-Tank Battery, R.A. Cook returned to the United Kingdom on the 4 January 1944. The unit were taken by train to Sleaford in Lincolnshire, where buses were waiting to take them to their new ‘home’ at Heckington. This was to be their base for the next 9 months.

Cook attended a refresher course in May 1944 at RAF Ringway. On Sunday, 17 September 1944, he took off for Operation ‘Market-Garden’ and took part in the Battle of Arnhem, attached as a Staff Sergeant Instructor to Headquarters Troop of the 1st Airlanding Anti Tank Battery, where he took part in the battle around the northern part of the Arnhem road bridge. He was wounded during the course of the battle, in the left thigh and the small of his back, and taken prisoner on the 21 September 1944.

Initially he was sent to Stalag 12A at Limburg in Germany, arriving there on the 29 September 1944. This was only a temporary transit POW Camp, and he was moved from there on the 8 October 1944. After a four day journey by rail, in cattle trucks, he arrived at Stalag 2A at Neubrandenburg. He would remain there until being liberated by advancing Allied units on the 17 May 1945.

Following repatriation from the PoW camp in 1945, Alf Cook served for two months at the Army School of Physical Training, 19 May to 17 July 1945, and then completed the remainder of his service as Company Sergeant Major (Instructor) at the Army Air Corps Depot until his demobilisation to the Army Reserve on the 9 March 1946.

Alf Cook met his future wife, Dolly, in 1940 while working at Rotherham Drill Hall and they married after the war in 1948.

In 1953 he was awarded a Royal Humane Society Testimonial for rescuing a Dutch seaman from drowning.

Alf Cook died suddenly of a heart attack on 1 November 1983.

Compiled by Harvey Grenville with assistance from Bob Hilton

'No Circus could rival this'

Men were training for the Second Front.

On the 9th August, 1943, Sergeant Instructor Cook was despatching a squad of parachute trainees from a C47 aircraft on a dropping zone in North Africa when Private Trevor jumped, his parachute fail 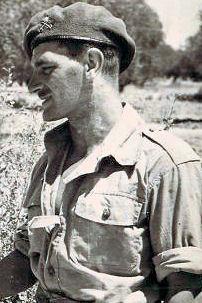