Private Alexander Anderson was the son of David and Jamesina Anderson.

He served with the Lovat Scouts prior to volunteering for airborne forces in 1942.

Pte Anderson qualified as a military parachutist on course 38, which ran at RAF Ringway from 20 November to 1 December 1942.

He joined the 1st Parachute Brigade as a reinforcement in 1943 and later served with the brigade's defence platoon.

Private Anderson died in the UK on 29 May 1944, aged 23 years old, and is now buried at St Peter and St Paul Churchyard, Belton, Lincolnshire. 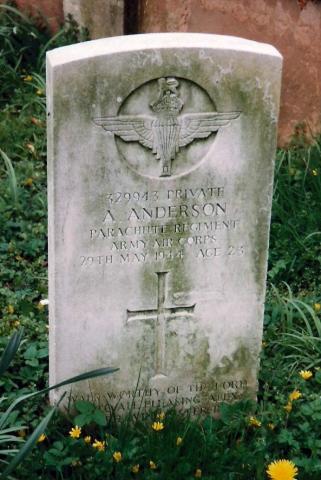