In December 1986, he formally joined Airborne Forces as part of 7 RHA (later 7 Para RHA), as a Parachute Volunteer. He successfully passed P Company in July 1987, and then his Basic Officers and Soldiers Parachute Course at No1 Parachute Training School, RAF Brize Norton in December 1987.

In 2000, he became a Analyst Programmer and was posted to UNICOM at Winchester before returned to Airborne Headquarters, which by November 2002 had been redesignated HQ 16 Air Assault Brigade. In September 2003 I was then posted to 13 Air Assault Support Regiment RLC, with whom he gained his French Parachute Wings.

In September 2005, he was then posted back to Winchester as a programmer until December 2006, after which he was deployed to Iraq during Op TELIC 9/10 for six months. His final tour of duty was with 27 Regiment RLC as a Warrant Officer Class 2. He left the Army in 2009, following 23 years colour service. 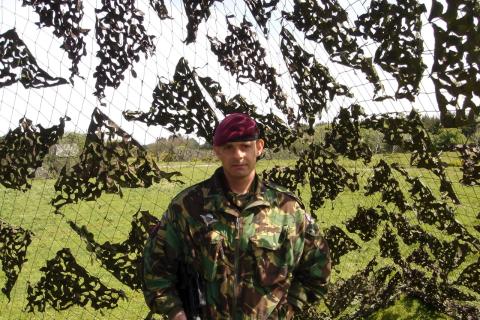