Whilst serving in North Africa he was granted an emergency commission in the field, as a Second Lieutenant in the East Surrey Regiment on the 4th October 1943.

He volunteered for airborne forces and was transferred to The Parachute Regiment (Army Air Corps) on the 18th December 1943. He was attached to parachute course 99, at RAF Ringway, which ran from 19th January to 3rd February 1944, to carry out his parachute course. This was a long course of eight descents which comprised 18 Officers and 235 men as reinforcements for the Airborne Division. His parachute instructors’ commented: “Well above average”.

Upon completion he was posted to the Depot & School Airborne Forces at Hardwick near Chesterfield. On the 28th February he was posted, along with Lieut’s E.L. Russell and R.A. Vlasto, to the 2nd Parachute Battalion, then based in Lincolnshire with the Headquarters being at Stoke Rochford Hall. [1]

He was promoted to war Substantive Lieutenant on the 4th July 1944.

Although at one time he appears to have been attached to ‘C’ Company, he was officially the HQ – Company, Sniper Officer.

On Sunday, 17th September 1944 he took off from Saltby airfield in a Dakota aircraft bound for D.Z. (Drop Zone) ‘X’ near Renkum in Holland, as part of ‘Operation Market-Garden’. He was taken prisoner at Arnhem Bridge on the 21st September and was being sent to a PoW (Prisoner of War) Camp, when he was hit by sub-machine gun fired directed into the back of the lorry where other officers had escaped from. He was badly wounded. He was eventually sent to Oflag VII-B, Eichstätt, Bavaria, until liberated in April 1945.

Information by Bob Hilton and images from David Tanner. 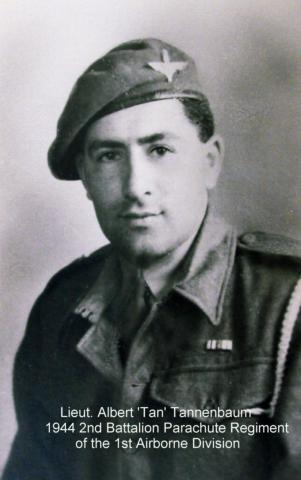