Albert Edward Small the son of Arthur and Edith Small was born in Fulford Barracks York in 1924. During the Second World War he was a van driver and member of the Home Guard. Aged 18 he enlisted into The General Service Corps in Wolverhampton on 1 July 1942.

Pte ‘Rocky’ Small was posted to The Durham Light Infantry in September 1942.

He volunteered for airborne force in June 1943 and attended parachute training course number 73 at RAF Ringway from 19-28 July 1943. His course report stated that ‘he has work hard with more experience would do well’. He was posted to B Company The 3rd Battalion The Parachute Regiment (3rd Para Bn).

Pte Small went to North Africa, arriving in late August 1943 and then on to Italy before returning to the UK in December 1943.

He went with 3rd Para Bn on Operation Market Garden, jumping into Arnhem on 17 September 1944, he was one of the few that managed to Return Across the River (RAR), he was wounded for a second time crossing the river (having already received a shrapnel wound to the knee) and was treated at Nijmegen Hospital before being flown home two days later.

In a questionnaire completed for Cornelius Ryan (who was researching his book, 'A Bridge Too Far') in April 1967. Pte Small recalled:

“Being asked by CSM Callahan if I could handle a six pounder A/T gun. I said "No". He said now is your chance to learn. After 10 mins instruction a King Tiger appeared. Loaded, took careful aim and squeezed the trigger. Nothing happened - a quick reload again nothing happened - I was just going to load again when I saw the tank gun swing towards us. We dived into a trench - after a loud explosion we looked for the A/T gun. It was wrecked - on close examination we found that the firing pin had been removed. Very funny but not facing a tank. This happened just after we had been told we were going to withdraw - and to make sure all stores had to be made useless.”

Corporal Small then went to Palestine in September 1945. He married his wife Beryl in Jerusalem on Boxing Day 1946.

On completion of his War Service Acting Sergeant Small re-enlisted and served in 3rd Para Bn unitl 1950, he was then attached to 12th Battalion the Parachute Regiment (TA) from 1950-53, Airborne Forces Depot (ABF Depot) 1953 and then returned to 3rd Para Bn and served with Middle East Land Forces (MELF) in the Canal Zone.

After another period with ABF Depot Sgt Smalll was posted to 10th Battalion, The Parachute Regiment (TA), (10 PARA (TA)) in January 1961.

On the 15th August 1961, CSM Small, serving with the 10th Battalion, The Parachute Regiment, TA, was awarded the George Medal. His citation reads:

On the 14th May 1961 Sergeant Small was on duty as a despatcher during Parachute Training from a balloon at the RAF Station Hornchurch. Immediately after he had despatched the first of four parachutists the balloon exploded and the cage, with only the collapsed fabric as support, started to free fall. Sergeant Small, with admirable presence of mind succeeded in despatching two more parachutists despite the cage tilting to nearly 45 degrees. These men descended unhurt. Sergeant Small could then have despatched the last man and, as an extremely experienced parachutist, jumped himself with a very reasonable chance of avoiding injury. However he considered that the balloon was now too near the ground for a comparatively inexperienced parachutist to survive a descent, and he therefore retained this man in the cage and remained himself. He then proceeded to give clear and calm instructions as to the best position to adopt to avoid injury. During this period the rate of descent had accelerated rapidly, and the cage was nearly inverted. On impact both occupants suffered only minor injuries; a miraculous escape due to the orders given by Sergeant Small. His companion is on record as saying that he considered that he was about to be killed, and that he undoubtedly would have been but for Sergeant Small.

Throughout the incident Sergeant Small's courage and presence of mind was beyond praise. By despatching two men in the most hazardous conditions, he saved them from serious injury or death, and lightened the cage at a critical period. By remaining with the last man, he undoubtedly saved his life, showing complete disregard for his own safety in the process.

By Wendy George with information from Keith Barrett-Small 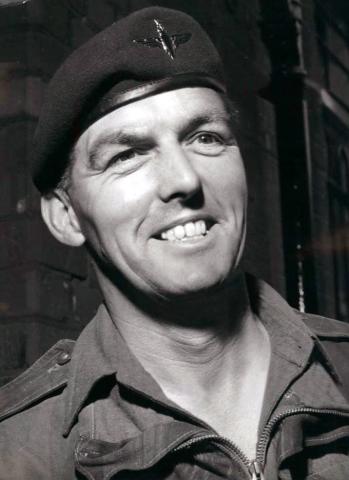