Albert Ernest Hall was the son of William and Edith Hall and the husband of Doris Hall, of Derby. He enlisted in the Royal Army Service Corps, and volunteered for airborne forces.

Cpl Hall was killed in action on 21 September 1944, aged 32, when RAF 437 Squadron Dakota KG-387, base Blakehill Farm, was shot down by German fighters and crashed near the ‘Sonniushoeve’ farm at Son, near Eindhoven, on the 101st US Airborne Division Landing Zone. Only three men survived and the Americans buried five casualties in the temporary US Military Cemetery at Son. At the time only Dvrs Woodward and Yeo could be identified. All the casualties were re-interred in the British War Cemetery at Bergen op Zoom on 18 November 1946. Cpl Hall was identified in 1948 and the remaining RAF crew were identified in 1996. (Roll of Honour, 5th Revised Edition, 2011).

If you are part of Cpl Hall’s family and would like to complete this biography, you can apply to the Curator to do so. To do this you will need to become a member of ParaData and select the 'friend or family member' option on the registration form. 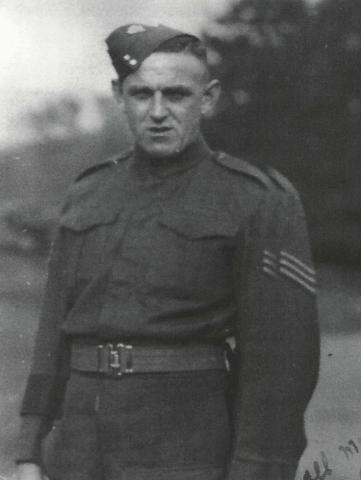