Private Albert Clarke was the son of Alfred Herbert and Sarah Hannah Clarke; and husband of Marjorie Constance Clarke of Watcombe, Devon. He served in the 12th (Airborne) Battalion, The Devonshire Regiment.

A shortage of aircraft meant that only one Company could be inserted by glider, with the remainder travelling by sea. The two elements of the Battalion formed up in the Ranville area on 7 June and operated in a defensive role repulsing German attacks.

The Battalion moved to new positions on the 14 June and was subjected to a very heavy concentration of shell & rocket projector fire on 16 June. Later, a determined enemy attack developed from the Escoville area which lasted over three hours before it was finally driven back. Private Clarke is believed to have been killed during this attack. 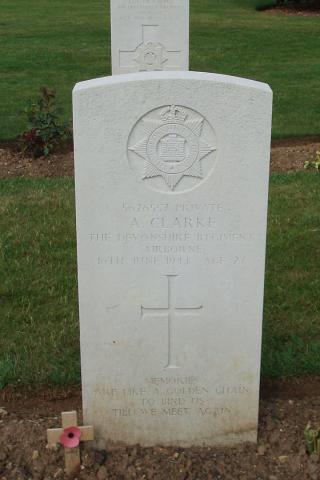