Sapper Alan Gauntlet was an engineering student before he joined the 4th Parachute Squadron, RE in 1944, having volunteered for Airborne Forces and did Parachute Course No 123, at RAF Ringway, 2 to 18 July 1944, along with three others sappers from the Squadron.

As a member of 3 Troop he parachuted on to DZ ‘Y’ on Monday, 18 September 1944, as part of Operation ‘Market’. This was the 2nd Lift and he had jumped from Aircraft C/N: 725, along with his Troop Commander, Capt HF Brown, and approximately half of the Troop.

During the ensuing battle in the Oosterbeek perimeter he was wounded and taken prisoner, and sent to the King Wilhelm III Barracks at Apeldoorn, which was being set up as a temporary hospital for all the British wounded. He escaped, along with L/Cpl. Johanson, and reached Allied lines via ‘Operation-Pegasus I’.

Sapper Alan Gauntlet was posted to the 1st Parachute Squadron, RE after his survivors leave. He went with this unit (now renamed the 1st Airborne Squadron, RE) to Norway in May 1945.

As a 13-year-old, Paul Gauntlet was once looking for a missing item in his father’s desk when he chanced on a newspaper clipping. According to this, Alan, his father, had fought in September 1944, at the Battle of Arnhem in the Netherlands. Puzzled, for he knew nothing of this, the boy consulted his mother. Quick to return the clipping to the desk, she muttered: “Your father doesn’t like speaking about the war.” Indeed, for more than 60 years, Alan never spoke of Arnhem, regarding the subject as “taboo”. Only in 2011 did the tall, upright engineer write his memories of how, as a 19-year-old sapper with the Royal Engineers, he had been dropped seven miles from Arnhem Bridge on 18 September 1944.

Alan, amid this chaos, was tasked with fellow sappers to hold the north western corner of the perimeter the paratroopers had established round the village of Oosterbeek. Just 100 yards from Alan’s position was woodland occupied by the enemy. Heavy shelling followed. On 23 September Alan was wounded in the leg by mortar fire. Dispatched to the nearest field hospital, he sat on the cellar steps. Later, he recalled the day in his diary: “Chaps say I am still bomb happy. Short of food. No cigs.”

Two days later, most of the surviving remnants of the division withdrew and Alan arrived as a prisoner of war at Apeldoorn barracks hospital. There, he met his friend from 3 Troop, Lance-Corporal ‘Jo’ Johanson. Their first escape plan failed. A second succeeded and the pair were swiftly picked up by the Dutch Resistance.

In September 1945, a year after the battle, Alan became one of the 120 veterans summoned to join the cast of Theirs is the Glory. (Filmed in Arnhem using veterans to ensure accuracy, it was the first film about the battle before the 1977 version, A Bridge Too Far). “We won’t be featuring pretty boys like you, we want only the tough-looking men,” Alan was told by the film-makers. Nonetheless, he appeared in several group scenes. Alan was believed to be the last Arnhem survivor to have starred in 'Theirs is the Glory'.

After a spell in Palestine, Alan returned to England, where he worked until his retirement as a civil engineer in the same company. “He is smart, clean and sober and can be relied upon to get the job done,” his Release Leave Certificate from the army noted in 1947. The same year he married Pauline (née Stevens). They had three children, Paul, Judith and Marie-Louise. They adopted a fourth, Steven. In 1971, Alan and Pauline divorced. A year later he married Helen Faye Hamilton. In December 2017 she predeceased him.

By then Alan’s story was in the public domain: a chapter is devoted to him in Theirs is the Glory (2016) by David Truesdale and Allan Esler Smith.

In character, he was loyal, just and fearless. When drunken football supporters swore in front of an 11-year-old Paul at a match, he rebuked them.

Nothing deterred Alan from duty. In September 2014 he gave a speech to the Imperial War Museum in Duxford, Cambridgeshire, for a special screening of Theirs is the Glory, on the anniversary of the film’s first showing. Aware of a sharp pain in his chest, Alan gritted his teeth to deliver a blow-by-blow account of the battle that was so vivid he received a standing ovation. Only later, when he visited his doctor, did he discover that the pain had been a minor heart attack.

His profile picture is Alan No 1 Troop, 1st Airborne Squadron, RE, in Norway. May 1945.

'After Arnhem', a personal account by Sapper Alan W Gauntlet 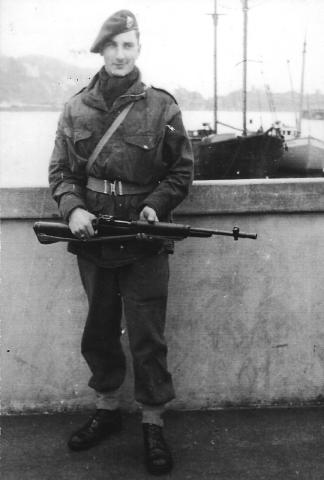