Sgt Alan John Wyatt qualified as  a military parachutist on Course 178 which ran at RAF Ringway from 29  August  to 18 September 1945.

After qualifying, he was initially posted to the The Parachute Regiment Reserve Battalion at Piddlehinton and later served as an Instructor with the Training and Holding Battalion at Talavera Barracks until 1947. He was then posted to Palestine where he served as Acting Company Sergeant Major for A Coy, 8th Parachute Battalion and was demobilised in 1948. 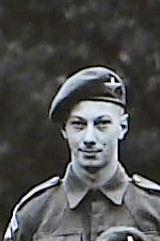