Alan Gray Rutherford was born in 1942 at Cramlington, Northumberland and educated at Gosforth Grammar School then Sheffield and Newcastle-upon-Tyne Universities.

Dr Rutherford enlisted into 12th /13th PARA (TA) at Pudsey in October 1960 whilst studying at Sheffield University, and undertook his Basic Para Course at RAF Abingdon in July 1961.

In 1963 following family tradition, he was commissioned into The Royal Northumberland Fusiliers (TA).

On moving to Edinburgh in 1966 he transferred to the 15th Battalion and was, for a short period, with Headquarter Company. Pressure of work and frequent travel enabled training attachments with various other TA units including the 4th Battalion at Gateshead.

From The Pegasus Journal December 1999.

Colonel Alan was a tireless champion of both battalions throughout his tenure, and his dogged persistence was in great part responsible for retaining paratroops in Scotland and helping the Battalion to weather the more recent storms of SDR. He has earned a reputation of never turning down a request, and has always been prepared to help in whatever capacity was appropriate, be it speaking to obliging employers who were penalising TA soldiers, lobbying ministers, interceding with TAVRAs, officiating at parades, attending meetings, or putting a bergen on his back and joining the Battalion snake.

He has also been a great supporter of the Regiment and Army as a whole, as Chairman of the Airborne Initiative, sponsor of the Army Ski Championships, and member of the Regimental Council. Colonel Alan was active in support of 4 PARA up until the day he retired, attending Annual Camp in the Czech Republic, and on his return, presenting berets to the successful July recruit intake. Although he has retired as Honorary Colonel, he will continue to assist in an informal capacity, particularly in Scotland.'

Col Rutherford is married to Roslyn and they have a son and a daughter. He is a Rugby Football enthusiast and keen hillwalker. A Former Trustee of ABF Charities and Co-Founder (with Glyn Gilbert and Alan Curtis) of Airborne Initiative (Scotland) in 1994, Col Rutherford is the President of Lothian Branch PRA. 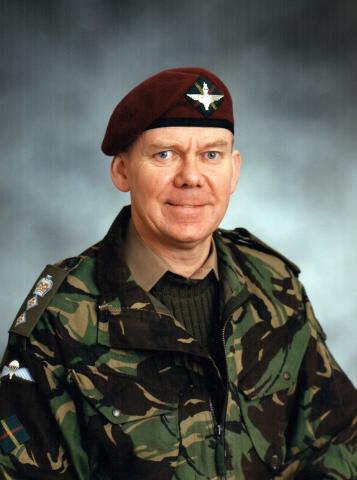