Alan Bush was born in Westmorland in the Lake District in 1914 as the youngest of nine children. He was a gifted sportsman and strong academically. From an early age he wanted to be a teacher, and won a scholarship to Queen's College, Oxford, to read English and History. He was awarded a Rugby Blue in 1934. After leaving Oxford he began teaching at Mill Hill School.

On the outbreak of war in 1939 he enlisted into the Coldstream Guards, before gaining a commission in The Border Regiment. By 1941, he had been made a Captain. He volunteered for airborne forces and was selected to join the 3rd Parachute Battalion, as Second-in-Command (2-i-c) of C Company.

He took part in the first parachute operation in North Africa at Bone in November 1942, when he jumped with a folding bicycle which he thought was one of the worst bits of kit he was ever issued with. He remained with the 3rd Para Bn for his entire wartime service, and was promoted to Major in February 1943 to assume command of C Company.

Bush later wrote about the North African campaign; ‘Long days and nights in the field, without protection from the elements affected all ranks. Weeks of communal living in what can only be called primitive conditions taught all, officers and men, that whatever applied to one, also applied to the other.’

He took part in the Sicily invasion in July 1943, although he was dropped in the wrong place and evaded capture. Returning to the UK after the Italian campaign in late 1943, he was appointed as second-in-command of the 3rd Para Bn, a post he still held at the time of Operation Market Garden.

His flight to Arnhem, in September 1944, was not at all a pleasant one, he later remarked that he was ‘the only person to have vomited my way into Europe. I was sick all the way, even though I had flown many times. It wasn't apprehension, because it all went like a practice drop; it was the petrol and oil fumes that did it.’

On the advance to Arnhem on 17 September, Major Bush was with the battalion HQ when the leading elements encountered Krafft's blocking line. An armoured vehicle appeared on the scene: ‘I was behind a tree, and he put the burst of fire meant for me into the base of the tree; he was in danger of cutting the tree down. A man from our Intelligence Section was near me. I told him to throw a grenade, but he froze, stationary as a startled rabbit. I have to admit that I couldn't throw my grenade; I had forgotten to prime it. I ran back, zigzagging, for fifty yards and hid in the undergrowth. The intelligence man was taken prisoner.’

Bush was not happy with the decision made by Major-General Urquhart and Brigadier Lathbury to halt the 3rd Para Bn overnight. He later wrote, ‘That was the start of the great cock-up. I felt very sorry for Lieutenant Colonel Fitch. Urquhart needed to get back to Division, and Lathbury wanted to get forward to the bridge. If we had not had those two with us, Fitch would probably have followed C Company around that route to the north, but he could hardly move without the approval of both the divisional and brigade commanders - a hopeless situation.’

The following day, Bush was with B Company (B Coy), along with Fitch, Urquhart and Lathbury, as they advanced into Arnhem. B Coy soon outran the remainder of the battalion who were meeting resistance in the rear, and when B Coy themselves met opposition they remained in a position of stalemate until darkness fell. During the day, Bush saw a German patrol very close to the house in which he was sheltering, ‘...only twenty yards away. I could see every bit of their equipment. I remember one had a big fat arse and I thought, "What a target!" They were being very casual. Three of our men were ready to open fire, but I ordered them not to. RSM Lord was there and he nodded approval; you can't start a battle with the divisional commander and the brigadier in the same house.’

Bush recalled: ‘The Colonel called an O Group with myself, the Adjutant - Charles Seccombe - and the IO [Intelligence Officer]. We were about 250 yards from the (Rhine) pavilion. The Colonel was sitting with his back to the German mortar fire, which was coming down steadily, foot by foot, along the bushes. I could see it coming and said we must get out of there. He told me to get the men back; most of them were behind us; the Colonel was as far forward as anybody. I moved back and found about thirty of our men and told them to run straight back to the pavilion. One or two were badly injured in the arms or shoulders, and I told these to go straight up the slope so St Elizabeth Hospital. I don't know whether they made it; with any luck they should have done. I expected to see the Colonel and the other officers in the pavilion soon after, but they didn't arrive.’

At some stage Bush was wounded in the leg and briefly went to the nearby St Elizabeth’s Hospital but quickly left and avoided capture by the Germans. Bush's leg wound took a long time to heal, and caused him problems for the rest of his life. He returned to Oosterbeek and took charge of the remnants of 3rd Para Bn which consisted of about 35 men with one other officer. His group helped defend the perimeter until the very end and he successfully returned across the Rhine on Operation Berlin.

His conduct throughout the battle led to him being awarded the Military Cross. His citation reads:

‘This officer has served with his Battalion since its formation in September 1941, and he previously fought gallantly in North Africa, Sicily, and Italy.

During the airborne operation at Arnhem, September 17th-25th, 1944, he was wounded on the first day and became separated from his unit. The following day he attempted to rejoin his unit but was taken prisoner. Through his resourcefulness and eagerness to fight he escaped and rejoined the remainder of the Division which was still in action.

He was given command of the 1st Parachute Brigade sector on September 22nd, and so successfully did he reorganise it that its front was never broken. On September 25th, while gallantly leading a counter-attack he was again wounded, but continued to lead his men until the end of the operation. Throughout at great risk to himself he constantly visited his men in every forward position, and his personal example was at all times enheartening and inspiring.’

After leaving the Army, he returned to Mill Hill School in north London during 1946, where he had taught briefly before the outbreak of the war. In 1958 he became Headmaster of Merchiston Castle School in Edinburgh, and his final position before retirement was at Campbell College in Belfast.

Aside from military experiences, he is perhaps best remembered in the airborne forces community for his ability to remember and play on the piano any tune he heard once.

Major Alan Bush (who died on March 3 1998, aged 83) was awarded an immediate MC at Arnhem during which he was wounded, taken prisoner, escaped, and rejoined his battalion. 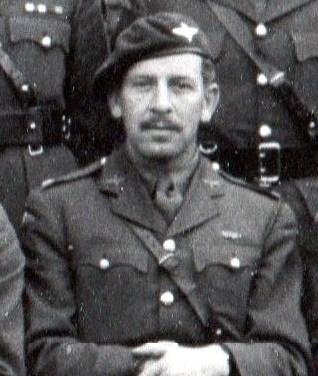