Rgr McCormick was posted to A Company, where he served with distinction for two-and-a-half years. His professionalism, selflessness and enthusiasm were well known across the Company and the Battalion. Rgr McCormick had served once before in Afghanistan on Op Herrick 8, and was quickly identified as a quality soldier. Voluntarily, he took on the responsibility as the lead Vallon (mine detection) man. He would be the first man on any patrol, showing the strength of character and courage that he would come to be known for.

Faugh-A-Ballagh! ('Clear the way!'), is the Regiment's motto, and Rgr McCormick was a man who truly cleared the way.

Despite a relatively short time in the Army he was able to offer guidance and advice to the newest members of his unit, often over a brew and having a chat about 'Star Wars'; he was a huge fan.

Rgr McCormick was very well educated and had aspirations to complete a degree in education in the future, a career to which he would have been well suited.

Ranger McCormick had been helping to clear an area of improvised explosive devices (IEDs) during a security patrol in Nad 'Ali when he was killed in an explosion.

Always ready with a smile, Rgr McCormick was always at the centre of the 'craic' and he will be sorely missed by all members of The Royal Irish Regiment. He leaves behind his mother, Margaret, his father, Lesley, his sisters, Callie-Ann and Tammy, his brother, Michael, and his girlfriend, Becky.

Ranger McCormick was killed in action in Helmand on 14 November 2010, aged 22 years old. He was buried early the following month in his home village of Macosquin, Co Londonderry, Northern Ireland. 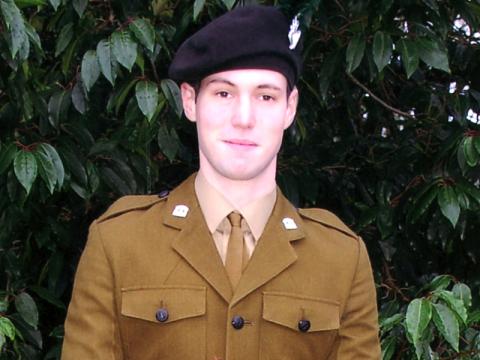