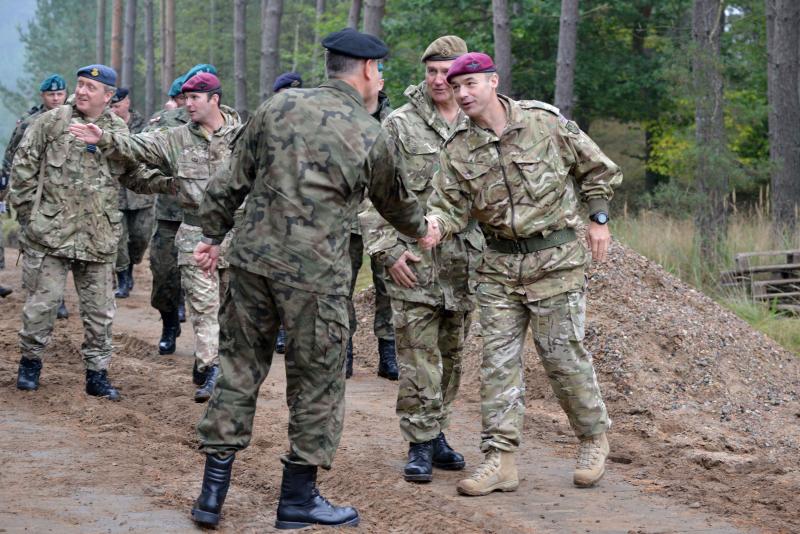 British Army’s rapid reaction force jump into Poland.  Paratroopers from 16 Air Assault Brigade were paid a visit by the Chief of the Defence Staff and his Polish counterpart whilst on exercise in Poland.

General Sir Nicholas Houghton and the Polish Chief of Defence joined members of A Company, 3rd Battalion the Parachute Regiment on Exercise ANAKONDA. This is one of a number of NATOs Immediate Assurance Measures, designed to reassure NATO allies in the region during the current crisis in Ukraine.

Exercise Anakonda has seen A Company work with the Polish 16th Airborne Battalion, 16 Batalion Powietrznodsantowy. The troops have planned and carried out missions side by side, to improve their understanding of the similarities and differences between so that they are better prepared to operate together. The exercise highlight was a joint parachute assault, with troops jumping from an RAF Hercules and Polish CASA C-295 to capture bridges on the training area.

The Chief of the Defence Staff said, “Ex ANAKONDA is a first-rate opportunity for the soldiers of 3 PARA to exercise core soldiering skills in a complex scenario alongside our Polish allies. For many, this was their first experience of working within an international coalition at a tactical level, and the lessons that teaches are invaluable. I look forward to seeing the success of this exercise replicated later this year when more than 1200 British troops arrive in Poland with NATO colleagues for Ex BLACK EAGLE.”

Major Ben Harrop, Officer Commanding A Coy, said: “This type of mission is what airborne forces were designed for – to parachute in and capture key strategic objectives by surprise within a wider operation. It is fitting that we have practised capturing bridges so soon after the 70th anniversary of Operation Market Garden, which saw British and Polish paratroopers fight together on exactly the same type of operation during the Second World War.

“The links between British and Polish airborne forces are nothing new and is important that, as NATO allies, we continue to develop our mutual understanding and ability to work together. Exercise Anakonda has been very productive in building our relationship and wider NATO interoperability and has tested the deployment of my Company Group which is held at Extreme High Readiness.”

Major Artur Wiatrowski, the commander of 16th Airborne Battalion, part of 6th Airborne Brigade said "British Paratroopers perform their tasks very well. Yesterday I had the opportunity to be in the area of their responsibility. I was impressed by the professionalism and commitment with which they perform their task. The way that they organized their military activity and combat posture were at the highest level".

Private Ross Breen, 23 from Beith, said “It’s been mega, the Poles are great blokes. Interesting to see how they do business which slightly different to us, but we’re the same type of soldiers with the same skills and attitude.”

The core role for Colchester-based 3 PARA is to alternate with 2nd Battalion The Parachute Regiment as the lead unit in the Air Assault Task Force (AATF), which is ready to deploy anywhere in the world at short notice. They are bolstered by artillery, engineers, signallers, medics and logisticians from 16 Air Assault Brigade to give them the flexibility and skills to conduct the full range of military operations.

NOTE: Anakonda is the Polish spelling of Anaconda.