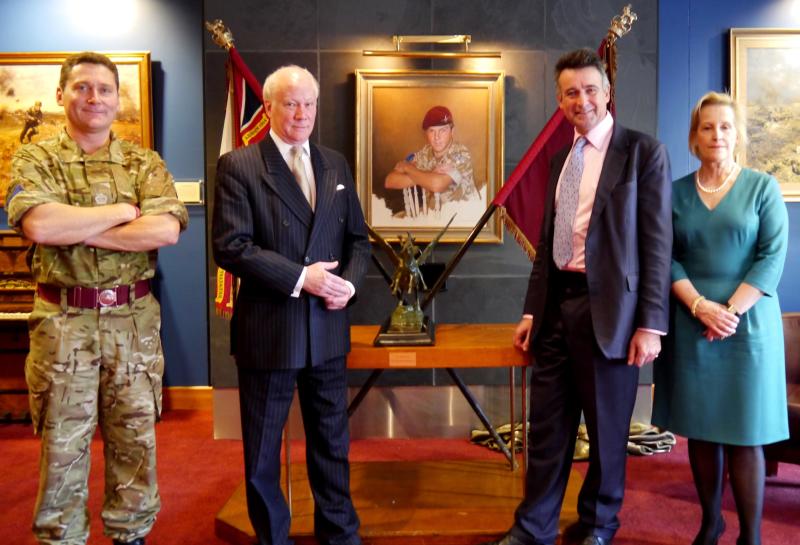 A portrait of an anonymous paratrooper that has raised more than £100,000 for the charity Combat Stress will take pride of place at Colchester’s Merville Barracks.

Following 16 Air Assault Brigade’s return from Afghanistan in 2008, portrait painter Richard Stone was commissioned by Bernard Jenkin MP to mark the contribution made by every soldier, not just those in command or who are officially recognised for exceptional bravery.

Mr Stone, whose previous subjects include the Queen and Baroness Thatcher, painted a nameless private soldier from 2nd Battalion The Parachute Regiment, chosen to symbolise troops returning from combat and facing the challenge of coming to terms with their experiences.

The painting, entitled Soldier Back From Helmand, has been used to raise £142,000 for veterans' mental health charity Combat Stress. Today (Fri 15 Nov) the painting was presented to 2 PARA by Mr Jenkin, Mr Stone and Uta Hope, director of fundraising and communications for Combat Stress. It will hang in the headquarters of 16 Air Assault Brigade as a reminder of the duty of care that exists between soldiers and those who lead them.

Lieutenant Colonel Adam Dawson MC OBE, Commanding Officer of 2 PARA, said: “Having witnessed extraordinary bravery, felt the sadness of loss and the elation of success in Afghanistan in 2008, I know how our mental wellbeing was tested during and after the tour.

“The most powerful tool in countering these extremes of emotion was, and continues to be, our closeness and the ability to reflect on what had happened. The Army’s support network does a magnificent job in assisting those who continue to recall these emotional echoes; Combat Stress bridges that support from those serving to those who have served.

“It was a great privilege for 2 PARA to champion Combat Stress and it is an honour to have the portrait so generously donated to the Battalion, where it will serve as a reminder of the soldiers who gave so much in Helmand.”

Mr Jenkin, MP for Harwich and North Essex and a vice-president of Combat Stress, said: “The point of this portrait is to celebrate how every person in the armed forces is exceptional. Every soldier in Helmand is a hero. To celebrate my 50th birthday in 2009, I decided to hold a fundraiser for Combat Stress in St Paul’s Cathedral crypt, where we gathered around the tombs of Nelson and Wellington, and the Falklands war memorial, to hear from the military historian, the late Brigadier Richard Holmes CBE TD JP. It was an honour that Lady Thatcher unveiled this picture on that occasion, when we raised £50k for Combat Stress. The artist Richard Stone donated this picture free on condition that we raised at least another £50k. Well, we’ve done even better, and that is a tribute to the power of this cause, and to the generosity of the people who have donated to this project, and of the artist. I am really proud that 2 PARA want to hang this picture in 16 Air Assault Brigade HQ.”

Mrs Hope said: “We are incredibly grateful to Richard Stone for his generosity, and for the wonderful funds raised by our supporters. The money will allow us to continue providing vital support to Veterans suffering from the psychological wounds sustained in their Armed Forces careers. These invisible injuries can have a devastating effect if left untreated so we would urge anyone who feels they or a loved one needs support to call our 24-hour Helpline on 0800 138 1619.”

Mr Stone said: “I always talk to my sitters while I am painting a portrait. To hear from this young soldier first hand accounts of the everyday bravery of our nation’s servicemen and women has been a huge privilege. I am humbled by all that I have heard. I hope that my painting is a just tribute to their extraordinary dedication to duty.”