A Gunner, who became known as 'Bullet Magnet', from 7 PARA RHA, Afghanistan, 2010 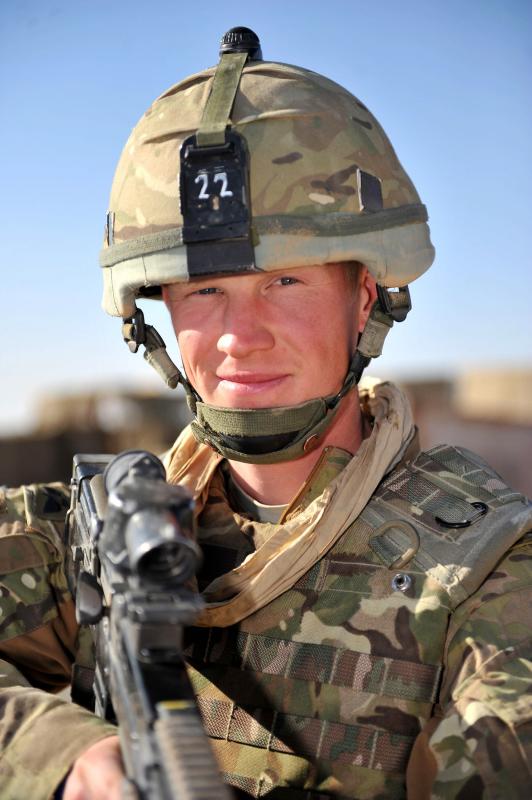 In two separate instances Gunner Carl Jordan received gun shots to the body, once to his front and once to his side – but on both occasions he walked away unscathed as his armour did the job for which it was designed and prevented the rounds causing him harm.

The first incident occurred while Carl was manning the defensive sangars protecting his patrol base. While monitoring an ongoing fire-fight, Carl felt a kick to his front as part of his body armour was ripped off.

He remembers using his radio to tell the Operations Room, where the co-ordination of battle takes place: “I think I’ve been shot”, but after being checked out by the medic and having his damaged body armour replaced, he was passed fit and carried on the rest of his shift in the sangar.

The second occurrence happened whilst Carl, a member of Colchester-based 7th Parachute Regiment Royal Horse Artillery, was deployed on the ground in support of the opening of a new police station.

On noticing that atmospherics had changed, and observing a build up of suspicious figures in the distance, Carl moved away from his support vehicle in order to take a bearing and send a report back to the Ops Room. It was at this point that a large gun battle began, with the enemy firing at Carl and his colleagues from a number of different positions with a variety of weapon types.

In the ensuing battle, Carl felt a kick to his side, which he took to be his driver trying to get his attention. The COYOTE vehicle in which Carl was travelling was riddled with bullet holes but Carl, despite having taken a bullet, remained unscathed.

Carl commented: “On returning to the patrol base I discovered the gunshot damage to the side plate of my body armour. The situation on the ground meant that there was no time to think about what had happened. I had a quick cigarette, even though I have actually given up, changed my side plates and deployed back out onto the ground again.

“I felt we needed to get back out there to show presence to the locals and insurgents alike – to show that we were not defeated and not fazed – and I wanted to be part of that."