Report on shooting of British PoWs in Brummen. 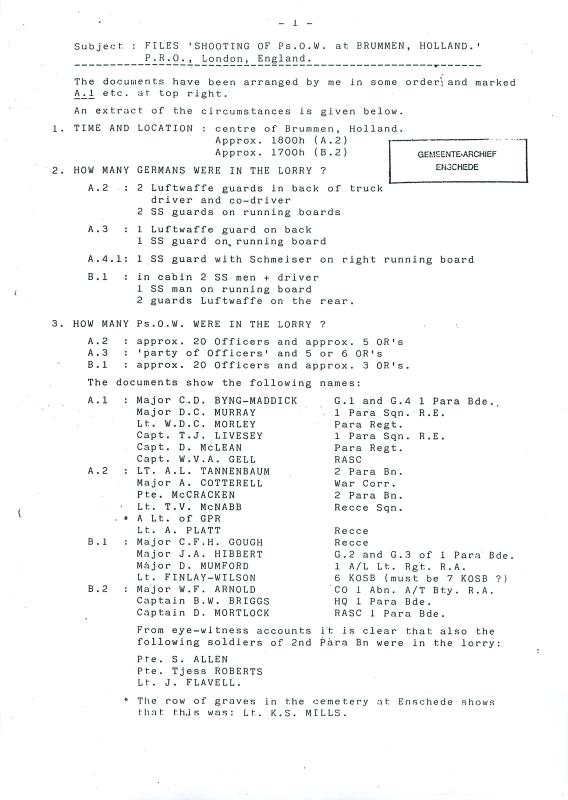 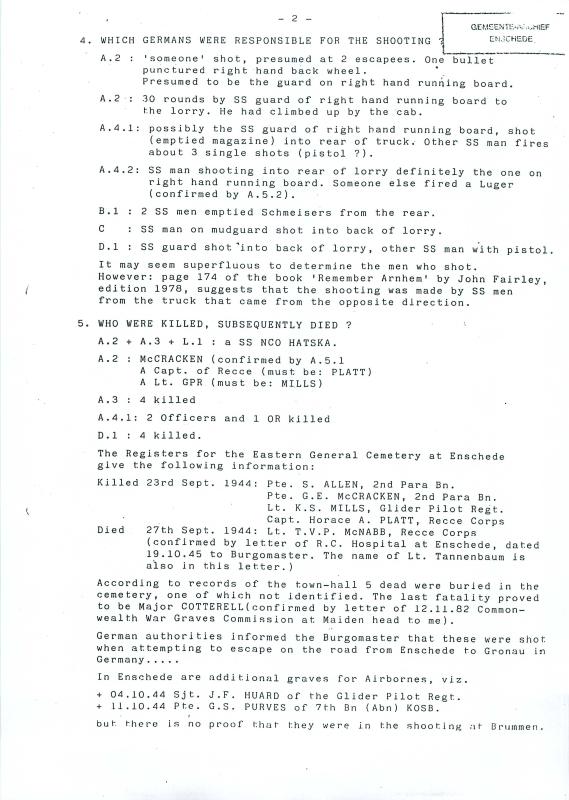 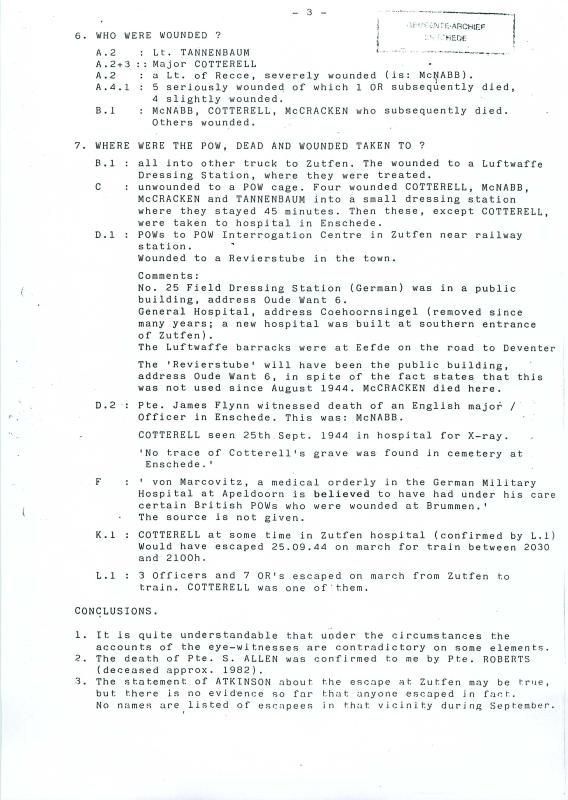 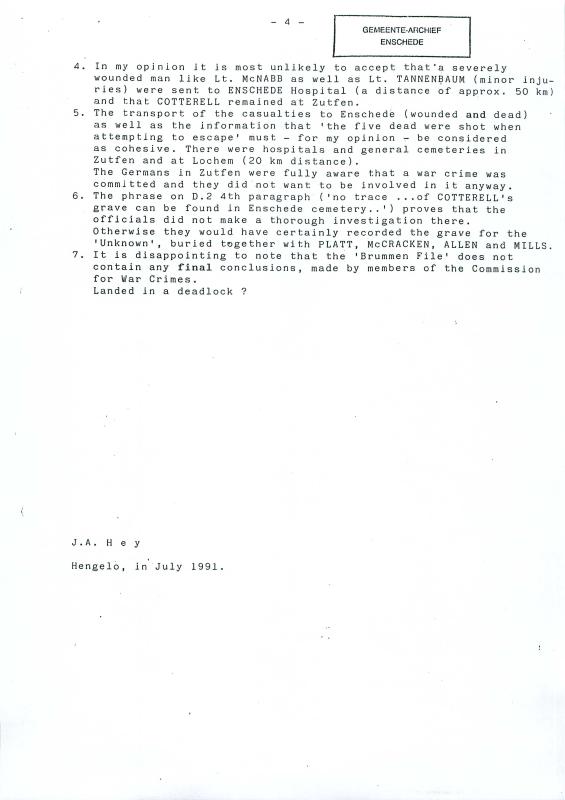 The documents have been arranged by me in some order and marked A.1. etc at top right.

A.2 : 2 Luftwaffe guards in back of truck Driver & co-driver 2 SS guards on running boards

A.3 : 1 Luftwaffe guard on back 1 SS guard on running board

A.4.1 : 1 SS guard with Schmeiser on right running board

The documents show the following names:

From eye-witness accounts it is clear that also the following soldiers of 2nd Para Bn were in the lorry;

*The row of graves in the cemetery at Enschede shows that this was Lt.K.S.Mills.

4.    WHICH GERMANS WERE RESPONSIBLE FOR THE SHOOTING?

A.2     : ‘someone’ shot, presumed at 2 escapees. One bullet punctured right hand back wheel. Presumed to be the guard on right hand running board.

A.4.2  : SS man shooting into rear of lorry definitely the one on right hand running board. Someone else fired a Luger (confirmed by A.5.2).

It may seem superfluous to determine the men who shot. However: page 174 of the book “Remember Arnhem” by John Fairley, edition 1978, suggests that the shooting was made by SS men from the truck that came from the opposite direction.

5.    WHO WERE KILLED, SUBSEQUENTLY DIED?

The Registers for the Eastern General Cemetery at Enschede give the following information:

According to records of the town-hall 5 dead were buried in the cemetery, one of which not identified. The last fatality proved to be Major. COTTERELL (confirmed by letter 12.11.82 Commonwealth War Graves Commission at Maidenhead to me)

German authorities informed the Burgomaster that these were shot when attempting to escape on the road from Enschede to Gronau in Germany . . . . . . . .

In Enschede are additional graves for Airbornes, viz;

But there is no proof that they were in the shooting at Brummen.

A.4.1  : 5 seriously wounded of which 1 OR subsequently died, 4 slightly wounded.

B.1     : McNabb, Cotterell, McCracken who subsequently died. Others wounded.

B.1     : All into other truck to Zutfen. The wounded to a Luftwaffe Dressing Station, where they were treated.

C        : Unwounded to a POW cage. Four wounded Cotterell, McNabb, McCracken and Tannenbaum into a small dressing station where they stayed 45 minutes. Then these, except Cotterell, were taken to hospital in Enschede.

D.1     : POW ‘s to POW Interrogation Centre in Zutfen near railway station. Wounded to a Revierstube in the town.

No 25 Field Dressing Station (German) was in a public building, address Oude Want 6. General Hospital, address Coehoornsingel (removed since many years; a new hospital was built at southern entrance of Zutfen). The Luftwaffe barracks were at Eefde on the road to Deventer. The ‘Revierstube’ will have been the public building, address Oude Want 6, in spite of the fact states that this was not used since August 1944. McCracken died there.

D.2     : Pte. James Flynn witnessed death of an English Major/Officer in Enshede. This was McNabb. Cotterell seen 25th Sept 1944 in hospital x-ray. ‘No trace of Cotterell’s grave was found in cemetery at Enschede.’

F : ‘von Marcovitz, a medical orderly in the German Military Hospital at Apeldoorn is believed to have had under his care certain British POW’s who were wounded at Brummen’. The source is not given.

L.1 : 3 Officers and 7 OR’s escaped on march from Zutfen to train. Cotterell was one of them.

1. It is quite understandable that under the circumstances the accounts of the eye witnesses are contradictory on some elements.

2. The death of Pte. S.Allen was confirmed to me by Pte. Roberts (deceased approx 1982)

3. The statement of Atkinson about the escape at Zutfen may be true, but there is no evidence so far that anyone escaped in fact. No names are listed of escapees in that vicinity during September.

4. In my opinion it is most unlikely to accept that a severely wounded man like Lt. McNabb as well as Lt. Tannenbaum (minor injuries) were sent to ENSCHEDE hospital (a distance of approx 50 km) and that Cotterell remained at Zutfen.

5. The transport of the casualties to Enschede (wounded and dead) as well as the information that ‘the five dead were shot when attempting to escape’ must – [in] my opinion – be considered as cohesive. There were hospitals and general cemeteries in Zutfen and at Lochem (20 km distance). The Germans in Zutfen were fully aware that a war crime was committed and they did not want to be involved in it [in] any way.

6. The phrase on D.2 4th paragraph (‘no trace . . . . of Cotterell’s grave can be found in Enschede cemetery . . . .’) proves that the officials did not make a thorough investigation there. Otherwise they would have certainly recorded the grave for the ‘Unknown’, buried together with PLATT, McCRACKEN, ALLEN and MILLS.

7. It is disappointing to note that the ‘Brummen File’ does not contain any final conclusions, made by members of the Commission for War Crimes. Landed in deadlock?