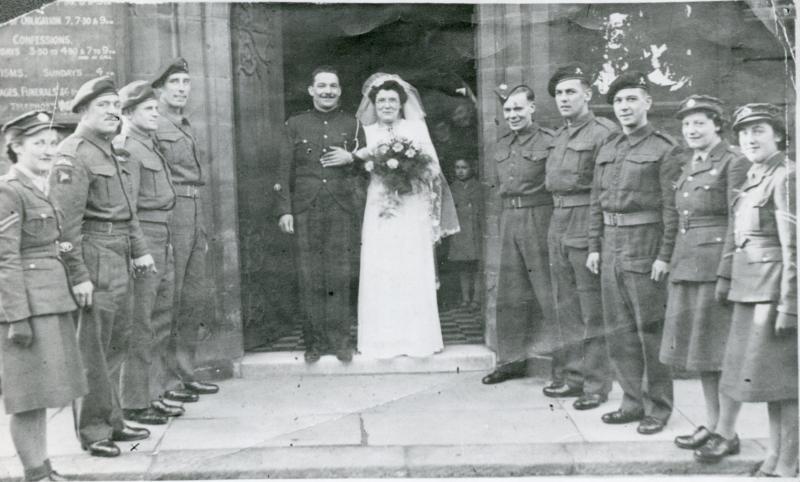 With Hardwick Hall being in the news I have pleasure in enclosing a photo for the Museum Archives of the wedding escort of the late CSM Gerald Alexander Strachan. (Awarded the Croix De Guerre with Palme at Bruneval). His widow, Ivy nee Leversidge (who kindly lent the photo for copying) was serving in a local unit of the ATS at the time and the ceremony was held at a local RC Church. Most of us who went through Hardwick Hall while Gerry Strachan was ‘In charge’ will remember being haunted by that whiplash Scottish voice which seemed to seek out all those who stopped doubling with – “Are Ye Tired Laddy?!”He was badly wounded at Bruneval and while serving with 2 PARA at Amhem he was again badly wounded and ended up a POW. In the confusion at the time leading up to the German surrender I gather he took off and ended up with the Russians. (any confirmation of these events would be welcome.) Post War he re-joined his parent Regiment, The Black Watch, and had the honour of leading the last unit of the British Army up the gangplank of a troopship for home when India was granted Independence. Now an RSM, Gerry, garlanded Indian style with flowers. was pictured in newsreels of the day grinning hugely as they were piped out. (Picture now in Black Watch Museum).Does anyone I wonder recognise any of the Escort which was comprised of Hardwick APTS, Airborne Staff and ATS from the Bride’s unit. (?). It is a sad reflection of our current times that his widow, Ivy, now in her eighties, was mugged and robbed inSheffield two years ago. Gerry Strachan died after the war as an aftermath of the serious wounds he suffered. aged just over 40. He had served more with than 20 years in the Army.