Citation for the award of the Military Medal to L/Cpl James Duncan, august 1967. 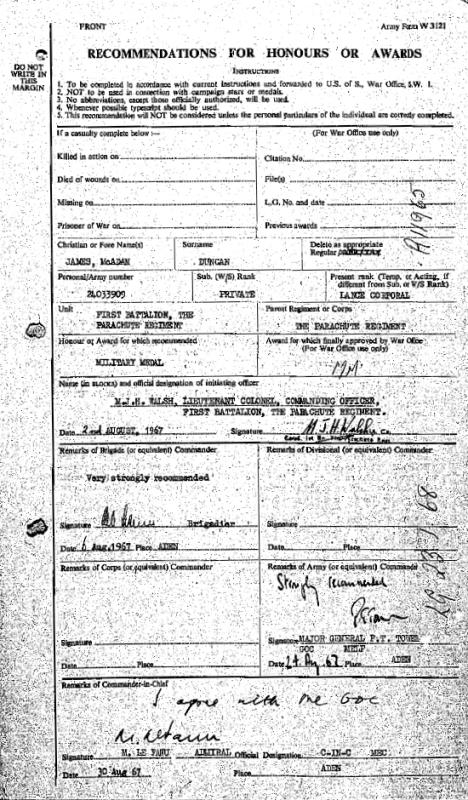 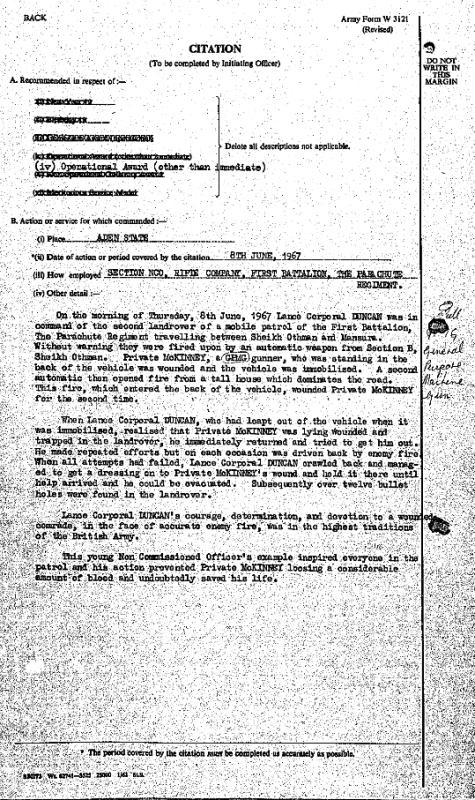 On the morning of Thursday, 8th June 1967, Lance Corporal Duncan was in command of the second Land-Rover of a mobile patrol of the First Battalion, The Parachute Regiment, .travelling between Sheikh Othman and Mansura. Without warning they were fired upon by an automatic weapon from Section B, Sheikh Othman. Private McKinney, a general purpose machine gun gunner, who was standing in the back of the vehicle was wounded and the vehicle was immobilised. A second automatic then opened fire from a tall house which dominates the road. This fire, which entered the back of the vehicle, wounded Private McKinney for the second time.

When Lance Corporal Duncan, who had leapt out of the vehicle when it was immobilised, realised 'that Private McKinney was 'lying wounded and trapped in the Land-Rover, immediately returned and tried to get him put. He made repeated efforts but on each occasion was driven back by enemy fire. When all attempts had failed, Lance Corporal Duncan crawled back and managed to get a dressing on to Private McKinney's wound and held it there until help arrived and he could be evacuated. Subsequently over twelve bullet holes were found in the Land-Rover.

Lance Corporal Duncan's courage, determination, and devotion to a wounded comrade, in the face of accurate enemy fire, was in the highest traditions of the British Army.

This young Non Commissioned Officer's example inspired everyone in the patrol and his action prevented Private McKinney loosing a considerable amount of blood and undoubtedly saved his life.