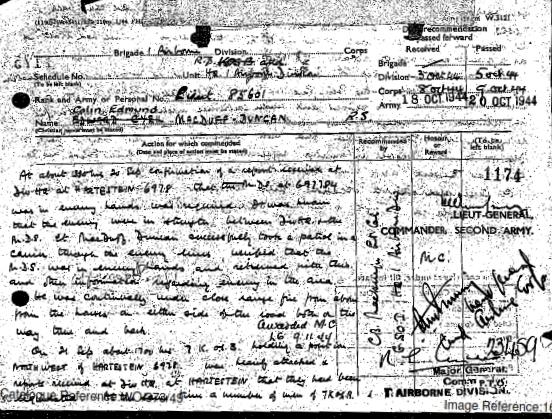 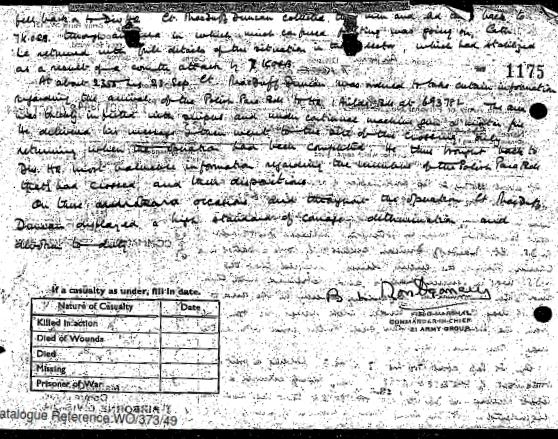 Lieutenant MacDuff-Duncan was a member of the 7th KOSB, but for the duration of the Battle of Arnhem he was attached to Divisional Headquarters as the Junior Liaison Officer with the 1st Airlanding Brigade.

At about 1330 hrs, 20th September, confirmation of a report received at Divisional HQ at HARTENSTEIN 6978 that the Main Dressing Station at 697784 was in enemy hands was required. It was known that the enemy were in strength between Div HQ and the Main Dressing Station Lieutenant MacDuff-Duncan successfully took a patrol in a carrier through the enemy lines, verified that the M.D.S. was in enemy hands and returned with this and other information regarding enemy in the area. He was continually under close range fire from above from the houses on either side of the road both on the way there and back.

On 21st September, about 1700 hrs, 7th K.O.S.B. holding a position NORTH WEST of HARTENSTEIN 6978, was heavily attacked and reports received at Divisional HQ at HARTENSTEIN that they had been liquidated. At the same time a number of men of 7th K.O.S.B. fell back on to Divisional HQ. Lieutenant MacDuff-Duncan collected the men and led them back to 7th K.O.S.B. through an area in which much confused fighting was going on. Later he returned with full details of the situation in the sector, which had been stabilized as a result of a counter attack by 7th K.O.S.B.

At about 2300 hrs, 23rd September, Lieutenant MacDuff-Duncan was ordered to take certain information regarding the arrival of the Polish Parachute Brigade to the 1st Airlanding Brigade at 693782. The area was thickly infested with snipers and under continual machine gun and mortar fire. He delivered his message and then went to the site of the crossing, only returning when the operation had been completed. He thus brought back to Divisional HQ most valuable information regarding the numbers of the Polish Parachute Brigade that had crossed and their dispositions.

On the occasions and throughout the operation, Lieutenant MacDuff-Duncan displayed a high standard of courage, determination, and devotion to duty.