Citation for the award of a second bar to the DSO to WS/Lt-Col Hill, 1946. 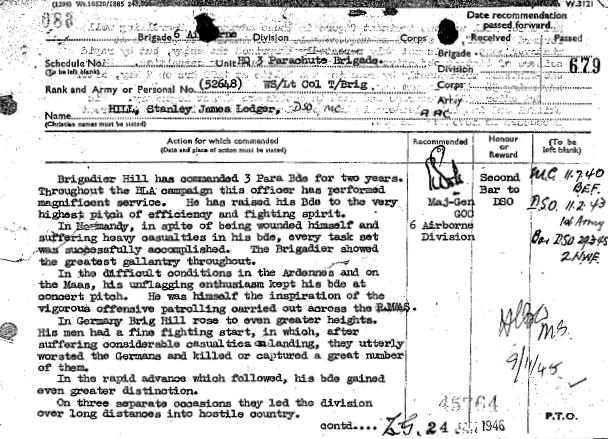 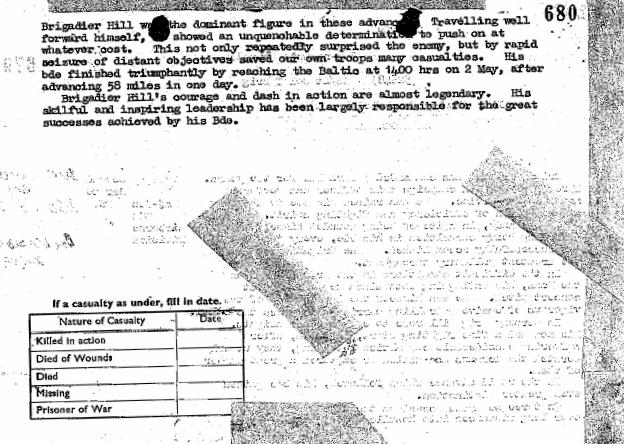 Brigadier Hill has commanded 3 Parachute Brigade for two years. Throughout the campaign this officer has performed magnificent service. He has raised his Brigade to the very highest pitch of efficiency and fighting spirit.

In Normandy, in spite of being wounded himself and suffering heavy casualties in his brigade, every task set was successfully accomplished. The Brigadier showed the greatest gallantry throughout.

In the difficult conditions in the Ardennes and on the Maas, his unflagging enthusiasm kept his brigade at concert pitch. He was himself the inspiration of the vigorous offensive patrolling carried out across the River Maas.

In Germany Brigadier Hill rose to even greater heights. His men had a fine fighting start, in which, after suffering considerable casualties on landing, they utterly worsted the Germans and killed or captured a great number of them.

In the rapid advance which followed, his brigade gained even greater distinction. On three separate occasions they led the division over long distances into hostile country. Brigadier Hill was the dominant figure in these advances. Travelling well forward himself, showed an unquenchable determination to push on at whatever cost. This not only repeatedly surprised the enemy, but by rapid seizure of distant objectives saved our own troops many casualties. His brigade finished triumphantly by reaching the Baltic at 1400 hrs on 2nd May, after advancing 58 miles in one day.

Brigadier Hill's courage and dash in action are almost legendary. His skilful and inspiring leadership has been largely responsible for the great successes achieved by his Brigade.