Citation for the award of a bar to the DSO to Brigadier Hill, 1944. 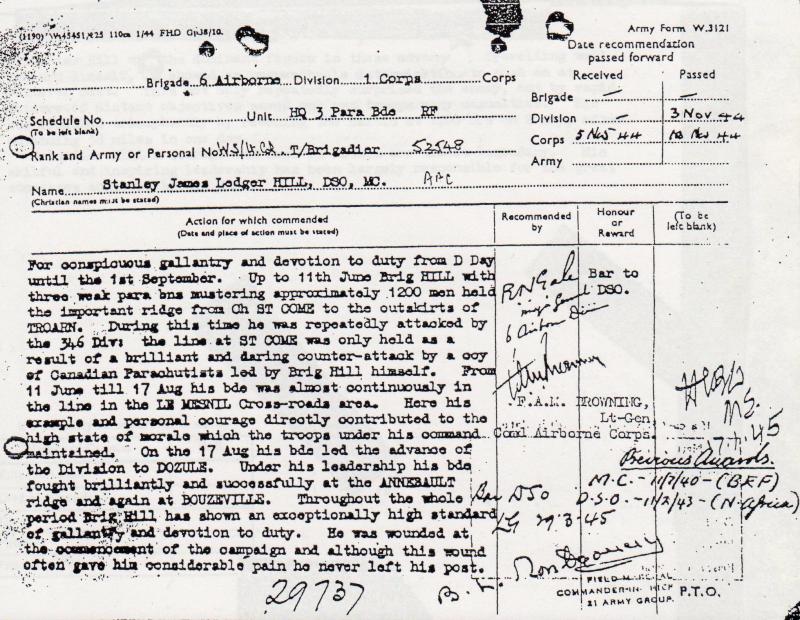 For conspicuous gallantry and devotion to duty from D Day until 1st September. Up to 11th June Brigadier Hill with three weak parachute battalions mustering approximately 1200 men held the important ridge from Chateau St Come to the outskirts of Troarn. During this time he was repeatedly attacked by the 346 Division: the line at St Come was only held as a result of a brilliant and daring counter-attack by a company of Canadian Parachutists led by Brigadier Hill himself. From 11th June till 17th August his brigade was almost continuously in the line in the Le Mesnil cross-roads area. Here his example and personal courage directly contributed to the high state of morale which the troops under his command maintained. On the 17th August his brigade led the advance of the Division to Dozule. Under his leadership his brigade fought brilliantly and successfully at the Annebault ridge and again at Beuzeville. Throughout the whole period Brigadier Hill has shown an exceptionally high standard of gallantry and devotion to duty. He was wounded at the commencement of the campaign and although this wound often gave him considerable pain he never left his post.