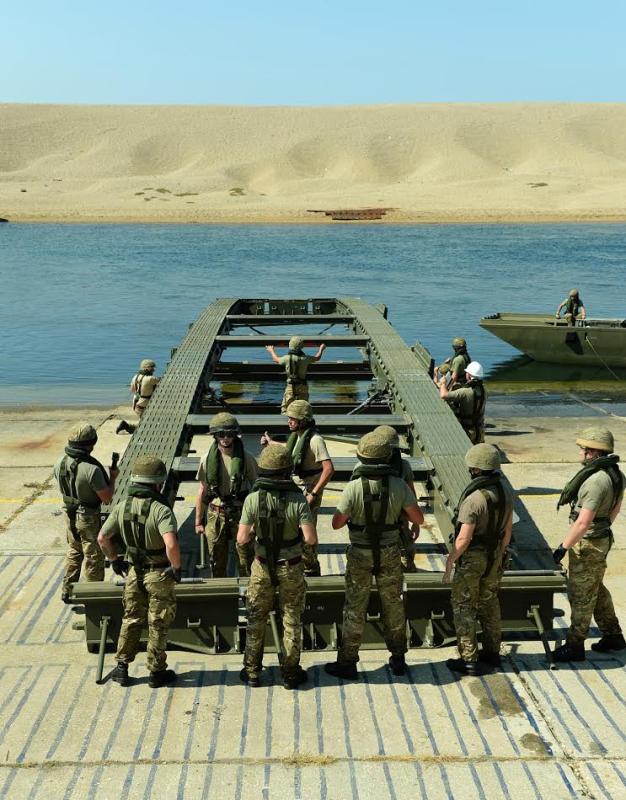 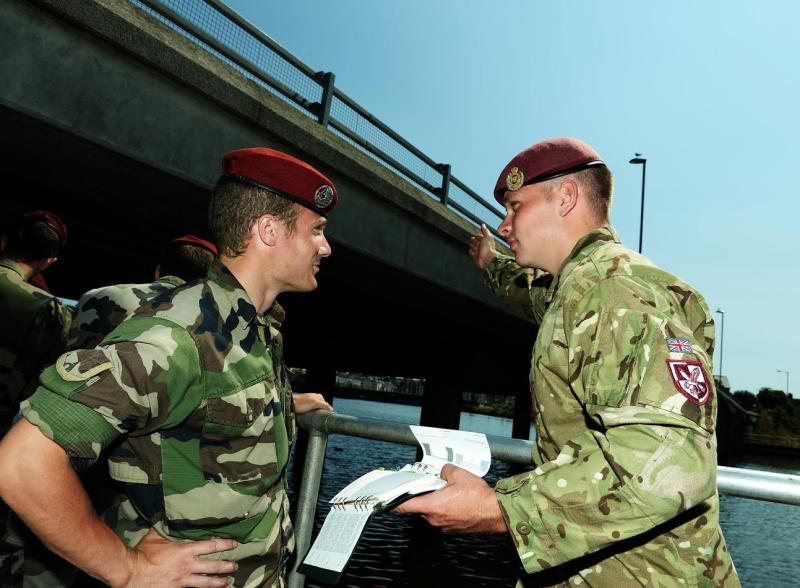 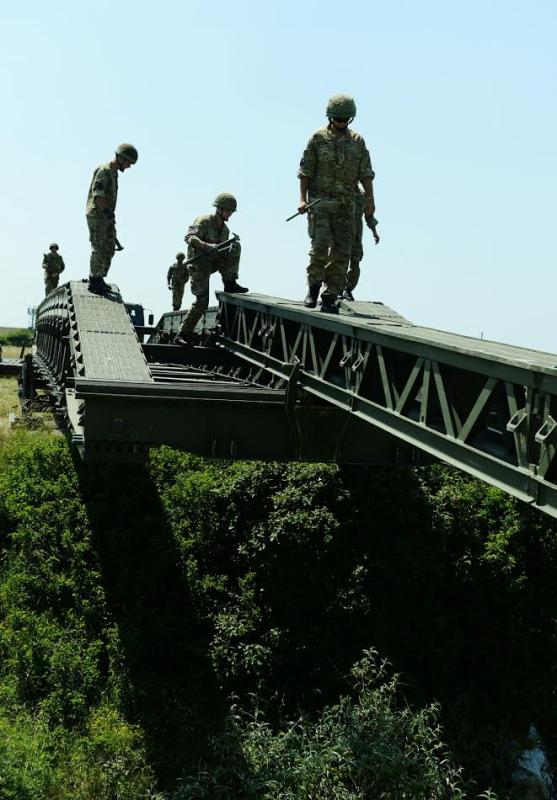 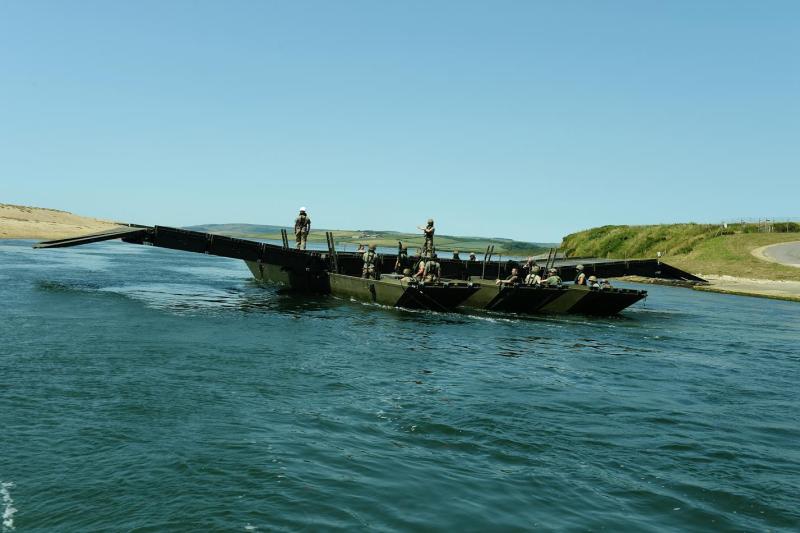 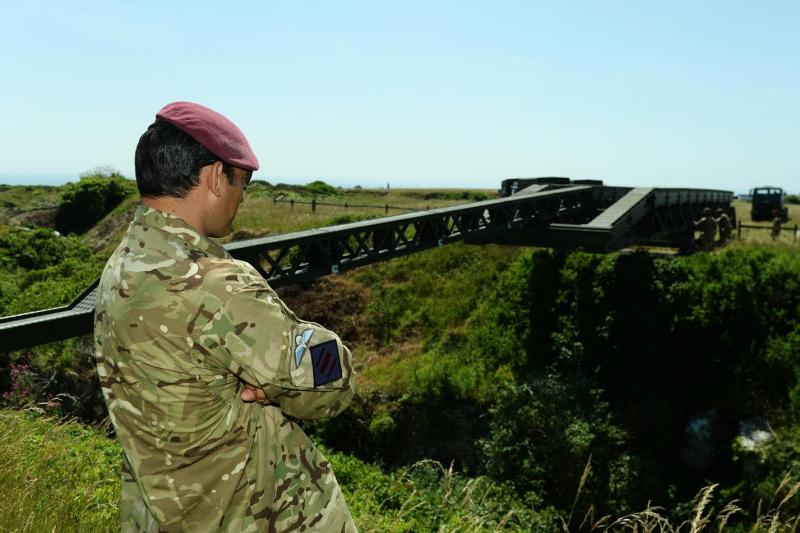 Airborne engineers have been joined by Reservist and French troops for a bridging master class as they train for their role in the British Army’s rapid reaction force.

From assessing the capacity of existing crossings to constructing bridges across fast-flowing water and deep gaps, Exercise EAGLE SAPPER has tested 23 Engineer Regiment (Air Assault), based at Woodbridge in Suffolk.

The training ranged from setting up a Medium Girder Bridge capable of carrying a Challenger 2 main battle tank across a 30m deep and 30m wide gap to taking to the streets of Weymouth to assess what military vehicles could use the town’s bridges.

Crossing the tidal waters of The Fleet, sandwiched between the shore and Chesil Beach, was a stern test for sappers setting up an Air Portable Ferry Bridge (AFPB). APFB can be parachuted or moved by helicopter and set up either as a conventional bridge or a self-propelled ferry to cross wider obstacles.

Staff Sergeant Kieran Dale was in charge of the build, with AFPB designed to be set up by 24 men in two hours and carry a 35 tonne load.

The 36-year- old from Nottingham said: “AFPB is very flexible and capable kit, but setting it up in a strong current is a real challenge. The ferry is built on the water and it’s very important to ensure the parts are correctly aligned, which is hard when the current is moving everything around.”

Among the 20 Reservists on the exercise was Sapper Nathan Gibson from South Shields, a medical electronics technician in civilian life.

The 26-year- old has been in 299 Para Sqn RE (V), which is the only parachute-trained engineer unit in the Army Reserves, for 18 months.

Spr Gibson said: “I’ve always been interested in the military and joined up to challenge myself. This is my first major exercise and it’s great to get out and do practical engineering tasks. The training is really well done and we’ve been treated the same as the Regulars.

“The skills I’m learning don’t directly relate to my job, but the wider experience I’m getting does. What I’ve learnt about teamwork and pulling together in uncomfortable situations has really developed my confidence at work.”

Parallel to bridging activity, the Regiment’s dive team was put through its paces in joint training with 17e RGP’s divers. In the waters of Portland Harbour the divers practised surveying underwater structures, clearing obstacles using hydraulic tools and search tasks.

The French engineers, who were divers and reconnaissance specialists, joined the exercise to learn about British equipment and techniques to be ready to deploy together as part of the Combined Joint Expeditionary Force, a partnership between 16 Air Assault Brigade and 11e Brigade Parachutiste (11e BP) for contingency operations.

Lieutenant Colonel Jason Hones, Commanding Officer of 23 Engr Regt (Air Asslt), said: “This exercise has been an excellent opportunity to work with the Regiment’s integrated Reserve squadron and our French counterparts."

“The Weymouth area is a tourist destination but this has been anything but a holiday for my sappers. We have worked extremely hard to practise and refine our techniques, particularly in the key mobility skill of bridging, to prepare for potential deployments as part of the Air Assault Task Force.”