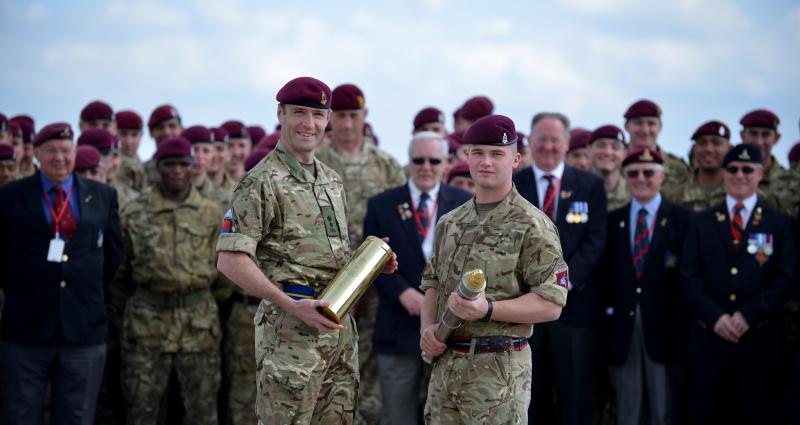 Airborne gunners have learnt about how the artillery they fire is tested for effectiveness and safety as part of celebrations of the Royal Regiment of Artillery’s tercentenary.

7th Parachute Regiment Royal Horse Artillery visited MOD Shoeburyness, which has been used for the artillery testing and evaluation since the opening of the British School of Gunnery in 1858. The gunners took the Captain-General's Baton with them, which has travelled around the world under the banner Ubique 300 as part of the anniversary celebrations. Ubique, meaning everywhere, is the motto given to the Royal Artillery by King George I on its formation in 1716.

The Colchester-based unit were joined on Tuesday (3 May) by veterans from the Royal Artillery Association for a tour of the site and its testing facilities, which are operated by Qinetiq for the MOD.

Lieutenant Colonel Matthew Birch, Commanding Officer of 7 Para RHA, said: “By bringing the Captain General’s Baton to Shoeburyness we are celebrating its role as the home of artillery technology for the last 150 years. The guns and ammunition that are used across the Royal Artillery have all been trialled at Shoeburyness and it has been fascinating to visit and learn more about the work done here.

“As part of the 300th anniversary of the Royal Artillery we have also been teaching our gunners about the history of airborne artillery. 7 Para RHA is the current manifestation of a specialist and demanding role that has 75 years of rich history, encompassing 18 regiments and 17 independent batteries.”