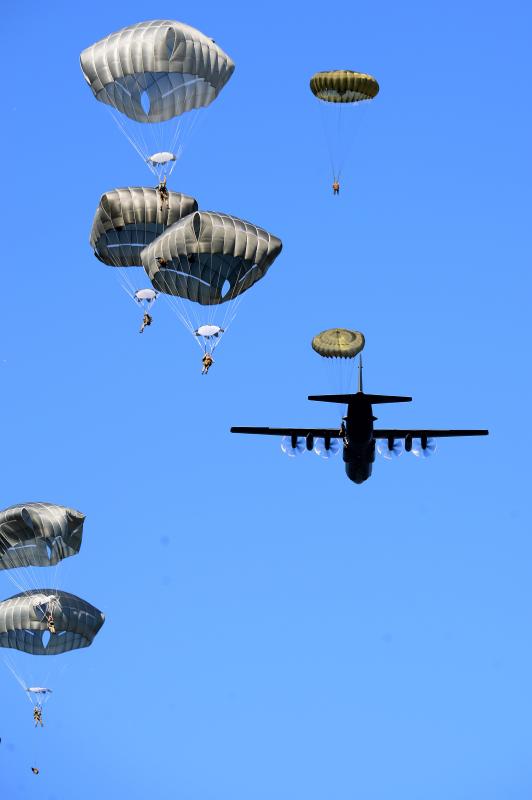 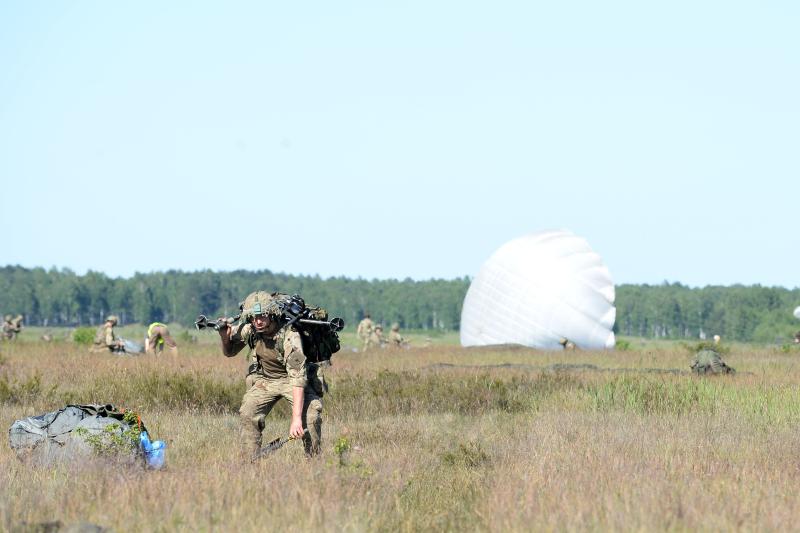 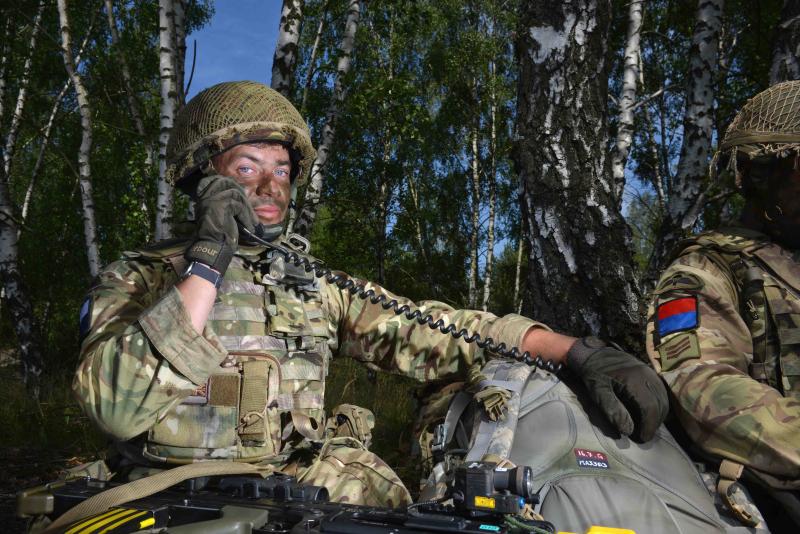 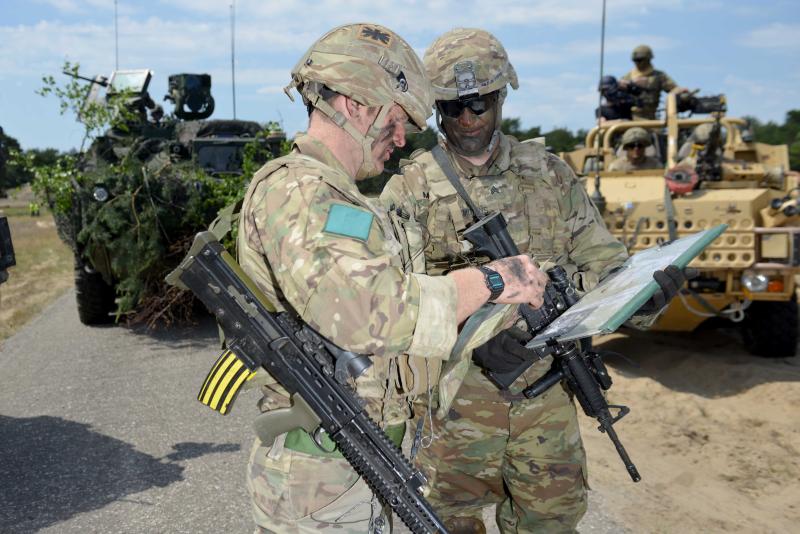 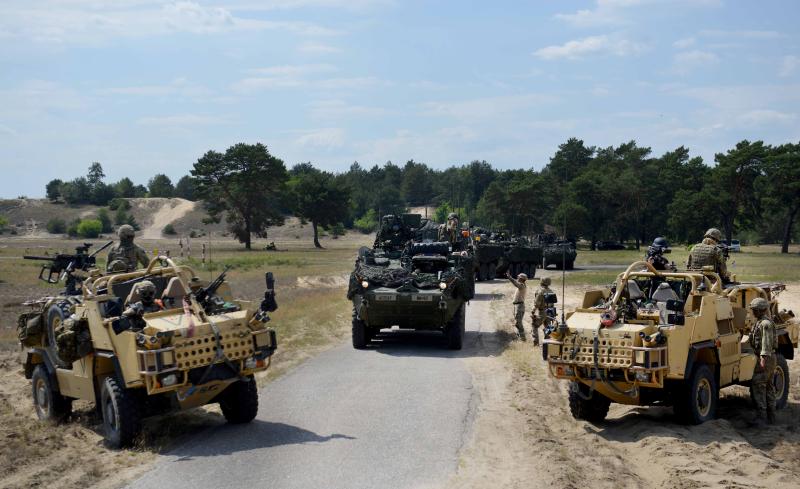 British paratroopers have jumped in alongside their US and Polish counterparts to show their ability to work together and deliver a Swift Response to international crises.

Some 230 soldiers from 16 Air Assault Brigade parachuted into Torun in Poland in a mass drop of 1,400 paratroopers from the US Army’s 1st Brigade Combat Team, 82nd Airborne Division and the Polish 6 Brygada Powietrznodesantowa.

Planning and communications specialists from Headquarters 16 Air Assault Brigade flew in from Fort Bragg, North Carolina alongside the US soldiers, with the transatlantic journey the longest insertion flight ever carried out by British paratroopers. A 105mm Light Gun from 7th Parachute Regiment Royal Horse Artillery was also dropped from a US Air Force C-17.

Tuesday’s jump (7 Jun) marked the start of Exercise Swift Response, which will see more than 5,000 soldiers from 10 NATO countries training together in Germany and Poland to improve their ability to operate together.

The force of multinational paratroopers and their equipment was delivered from 20 aircraft, including two RAF C-130 Hercules. Two companies from 3rd Battalion The Parachute Regiment mounted from Ramstein Air Base in Germany for the jump.

On the ground, the troops’ mission was to capture key positions to enable the US Army’s 2nd Cavalry Regiment to pass through Torun the following day. The unit’s Stryker armoured vehicles are driving 1,250 miles from its base in Vilseck, southern Germany to a NATO exercise in Estonia.

Colonel Graham Livingstone, Deputy Commander of 16 Air Assault Brigade, said: “Exercise Swift Response is a powerful demonstration of the strategic reach and agility of airborne forces and their ability to react rapidly to emerging crises. Training with our partners builds the scale of what we can achieve, develops understanding about the way we each operate and shows our readiness and ability to act together to protect shared interests.

“The mission we are practising in Poland is a textbook example of how airborne forces can be used, parachuting in ahead of heavier forces to secure the way for them to pass through and continue the advance.”

Among those who jumped in from the USA was Staff Sergeant Martin Corbett, of 216 (Parachute) Signal Squadron, who is patrol commander for the Brigade’s tactical HQ.

“The last 36 hours has been a bit hectic,” he said. “We started off in Fort Bragg to fly in a C-17 across the Atlantic, rigging our parachutes on the way, and then jumped in to Poland. It’s quite a thing to have flown the longest insertion by British airborne forces, but this exercise hasn’t given me time to think about it!On the ground, we met up at the RV point and then have been constantly moving across the area on the foot to allow the commander to control the operation.”

3 PARA’s Private Martin Jones is a Jackal driver, with the armoured vehicles providing fire support to the rifle companies and escorting the Strykers through British lines.

The 27-year-old from Warrington said: “This has been a fast-paced exercise – it was only 24 hours between the guys jumping in, securing the ground and linking up with the American armour to achieve the mission. Working in different countries and environments with different armies helps develop our own skills and experience. We’ve learnt about how our allies operate and shown them our capabilities and professional attitude.”

As the exercise continues, 16 Air Assault Brigade will reconfigure itself to partner with the French 11e Brigade Parachutiste as the Airborne Combined Joint Expeditionary Force (A-CJEF). As part of the 82nd Airborne Division, the French-led A-CJEF will jump into Hohenfels in Southern Germany for a demanding week-long mission to restore stability to a troubled region. The ground troops will be supported by a combined aviation battlegroup of British and French attack and support helicopters, commanded by 4 Regiment Army Air Corps.