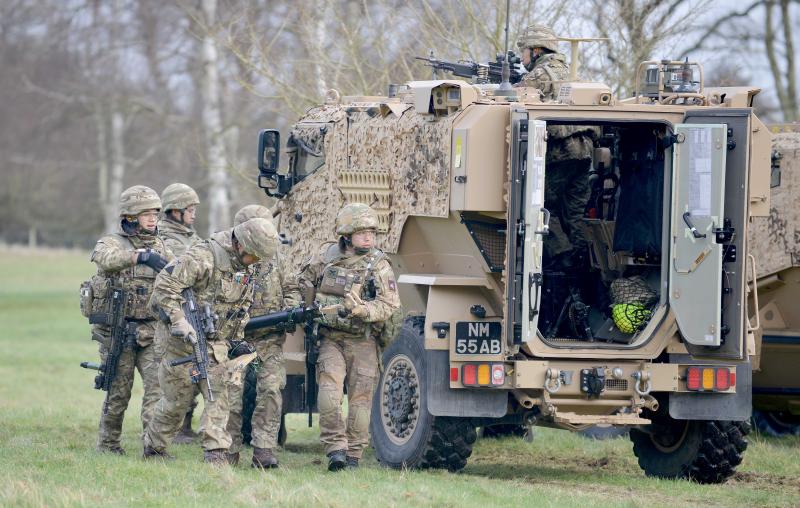 Folkestone-based 2nd Battalion The Royal Gurkha Rifles (2 RGR) is deploying to the Afghan capital as part of the UK’s enduring support to the Afghan Government. Their mission is to protect NATO military and civilian advisers working in government ministries, as well as UK advisers based at the Afghan National Army Officers’ Academy.

The Gurkhas are light infantrymen, used to operating on foot, and learning about working from Foxhounds has been key preparation for the mission. The state-of-the-art vehicles will provide the best in protection whilst moving around the busy streets of Kabul.

The Gurkhas are out in Foxhounds on the STANTA ranges in Norfolk this week (8-12 Feb) practising for scenarios which they could face in Kabul, such as recovering a broken down vehicle.

Captain Bikulman Rai, second-in-command of B Company, said: “Our role in Kabul will be to provide force protection to the NATO advisers helping the development of the Afghan Army and Government. We will be protecting the mentors when they go out to support training or attend meetings. We have been working with the Foxhound for several months and our soldiers have shown the flexibility to adapt to a different way of operating quite easily. The training has been very thorough and we feel like we are pretty much ready to go.”

Some 400 Gurkhas will start to deploy to Kabul from their base at Sir John Moore Barracks in Shorncliffe in April, with the eight-month tour split into two roulements.

Rifleman Hari Rai, 22, said: “I’ve trained as a Foxhound driver for this tour and the more time I’ve spent behind the wheel and training with my colleagues the more confident I feel. It’s a really good vehicle with strong protection against IEDs and small arms fire. Kabul will be my first tour and I’m excited to deploy. I’ve been in the Army for three years and I’m looking forward to using the skills and drills I’ve learnt on an operation.”

2 RGR deployed on three tours of Helmand Province before the end of NATO combat operations in late 2014, with the focus for this tour on enabling the training of Afghan forces so they can secure their own country.

Corporal Pratap Tamang has deployed on three tours of Afghanistan. The 31-year-old section commander said: “We’ve been learning a lot about how to operate from the Foxhound, and everyone’s keen to go out and do the job. For most of my section it’s their first tour, but for those of who are returning to Afghanistan it will be a fresh challenge, working in a different role in a different environment.”